Home Who are the Best-Looking NFL Players?
TTop List

Most of us have surely envied or thirsted the look of NFL handsome hunks.

National Football League (NFL) is the professional American football league. It was founded in September 1920 in Ohio, United States.

The league includes 32 teams, among which the Green Bay Packers (originally The Green Bay Acme Packers) is the oldest team. Moreover, it is the same team that holds the most title in the league.

There are almost 1,700 players currently playing for the 32 teams, and now we will talk about the top 12 best-looking NFL players.

There are a lot of good-looking NFL players, and choosing only 12 is a cruel and impossible task.

Nonetheless, check out our reach on the 12 Best-Looking NFL Players.

This list is not made on a ranking basis, so you are free to choose your favorite player!

Before letting you know more about these handsome hunks, the list has been compiled as of the year 2021/2022 and, the details about the players have been collected from the verified sports website.

While in high school, Brady was a talented baseball player, but he found his way into football, where he currently comes on the list for winning five Super Bowls.

Tom is known as one of the best quarterbacks of all time. And with his attractive looks, he has been the heartthrob of many fans.

Likewise, the player has been on the cover for several magazines and has presented himself as the face of a variety of brands.

Another handsome hunk in the league of National Football is Jimmy Garoppolo.

The guy with the rectangular facial structure and hazel eyes played eight games as a freshman where he managed to pass 1,639 yards and 14 touchdowns.

Currently, he has a passer rating of 98.9% and has already cleared 659 passings.

Jimmy has been on the field since 2014 and has a great fanbase, all thanks to his ripped physique, sharp jawline, and sculpted beard.

As a matter of fact, Garoppolo was in a relationship with an adult film actress, and he never tried to hide this.

Colin Kaepernick is not only a handsome football player but an activist too.

Kaepernick is widely recognized for his protest against racial inequality he showed in 2016. To illustrate, the player knelt during the national anthem at the start of the NFL game.

Moreover, Colin has been awarded the Western Athletic Offensive Player of the Year. Furthermore, he also received the Most Valuable Player of 2008.

His “glorious afro” undoubtedly makes him attractive and kinda sexy too.

Russell Wilson is the former player for the Seattle Seahawks, with whom he had a four-year contract worth $87.6 million. In fact, this contract made him the second-highest-paid player in 2015.

The tall guy with sleek black hair has been honored with the title of the Conference Player of the Year for the fact that he ran for 1,132 yards and managed 18 touchdowns.

The next player in the list of handsome players is Clay Matthews, the six-time Pro Bowl for the Green Bay Packers.

Moreover, the former linebacker is also the two-time All-Pro and All-Time quarterback sack leader for the team.

Serving with the classic look, it always looks like nobody could wear that ponytail so elegantly as Clay does.

Matthews was selected as the AFC Defensive Player of the Week twice in his NFL career.

He is the tall, bald, and attractive player who formerly played for Dallas Cowboys.

To detail, Austin signed for the Cowboys in 2006 and quit after eight long seasons. And during this time, Austin grabbed two Pro Bowls.

Read About 21 Best Hotels in Asia…

The next handsome player on the list is Eric Decker, the former wide receiver for Denver Broncos.

Eric was drafted by the Broncos in the 2010 NFL Draft.

He loved playing football at the University of Minnesota, where he also received his bachelor’s degree in business.

The former NFL player admits that his dressing sense has improved a lot as his wife chooses a dress for him. Well, he would look great on any clothes for sure.

To add further, he is also an ambassador of the Buffalo David Bitton clothing line.

Reggie Bush played for the USC Trojans Football. The handsome player has been awarded Doak Walker and Walter Camp honors.

There is no doubt that this tall player with sharp, trimmed black hair looks very attractive.

However, Bush was charged with a fine for improper activities while playing football at USC.

This NCAA investigation made him return his Heisman Trophy as well.

The next handsome man from the NFL, Cam Newton of Carolina Panthers.

Cam is the first rookie quarterback in the history of the NFL who succeeded to throw more than 4,000 yards in his first single season. Moreover, he also made 14 touchdowns.

Now, why is he on the list of attractive NFL players? The answer is simple; for his looks and dressing sense!

Newton is often admired for his sense of style and the way he carries it. His black hair and deep dark eyes are a plus factor to accentuate his look.

Furthermore, he has already been honored with the Heisman Trophy, Davey O Brien Award, and Bell Bert award.

Holding the tenth position is Brock Osweiler. The tall footballer is a former quarterback for Denver Broncos.

Brock made it to the NFL during the 2012’s draft, whereas he played football in college before getting into the league.

He played for four years with the Broncos and retired in 2019.

DeSean Jackson is another good-looking player in the NFL who plays for the Las Vegas Raiders.

Jackson played football in college, where he was in the team California Golden Bears. For his great skills, he was also honored as a consensus All-American.

Furthermore, DeSean has a son with his fiance, Kayla Philips.

The young and tall Christian McCaffrey is another best-looking NFL player who currently plays for Carolina Panthers.

The attractive running back has beautiful bluish-grey eyes which look perfect with his brown hair.

Furthermore, McCaffrey is in a romantic relationship with Olivia Culpo, since 2019.

Now, on the field, Christian holds the record for the Most All-Purpose Yard he achieved in a single season. 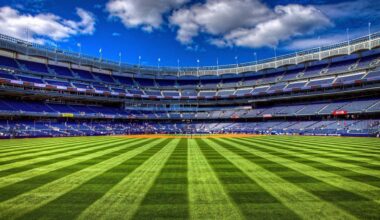 Read More
Best Cricket Stadiums In The World!! Cricket is the second-most followed sport in the world, with almost 2.5…