Do you know what the most valuable comic books are? Can you guess how much they cost? Fear, not we will clear all of your doubts.

Comic books have been an integral part of the entertainment of people for a very long period. Before the introduction of the internet, people read comic books to escape their monotonous lifestyle.

Especially, children have been fond of these books.

When we were kids, we spent a lot of time reading comic books and used to fantasize about the book’s main character. Comic books have a different fanbase and are read all around the world.

Now, without wasting much time, let’s get straight to the point. Here is a table to show the list of the most valuable comic books with their release date and value.

Action Comic 10 is the sequel of Action Comic 1. It was written in 1938 by Jerry Seigel. Also, it is the longest-running comic book series.

Superman is the protagonist of this book while Wyman is the antagonist, and other supporting characters are George Taylor, Jimmy Olsen, and Lois Lane.

The book’s original price in 1938 was 10 cents. As it is part of the early release of Action Comics, it started becoming rare and was ultimately sold for $258,000.

This comic book is based on many superheroes like Ironman, Captain America, Hulk, Thor, etc.

Whiz Comics#2 is the second series of the famous comic book Whiz Comics. Bill Parker wrote this book in 1940. So, it is really hard to find it these days.

Captain Marvel is the protagonist, whereas Dr.Sivana and Ebenezer Batson are the antagonists.

The book was published a few decades back so, only a few copies of the initially released copies are left. It was sold for $281,000.

Fantastic Four#1 is the first release of the series Fantastic Four. Stan Lee and Jack Kirby wrote this book in 1961.

Many TV shows and movies have adapted the storyline of this book. The primary characters of this comic are Mr. Fantastic, Human Torch, Invisible Woman and, others.

Incredible Hulk#1 is the first comic book of this series. This book introduced Hulk, who is one of the most powerful superheroes of all time. And, many movies and TV shows are based on this comic series.

Hulk is the protagonist of the book, whereas Gargoyle and Igor Drenkov are the antagonist. Other supporting actors are Betty Ross and Rick Jones. Mark Ruffalo has played the role of Hulk in the movie ‘The Incredible Hulk.’

The comic was introduced one of the most liked superheroes. Captain America is based on a young guy who joins the military and gains a superpower.

This book was written by Joe Simon and Jack Kirby in 1941. It is the 1st book of the series.

Tales of suspense #38 is the 38th book of the series. This book was written by Stan Lee and Larry Lieber in 1959.

The protagonist of the book is Ironman and Wong-Chu is the antagonist. And, another supporting character is Professor Ho Yinsen.

Action Comics#7 is the 7th book of the series Action Comics. Jerry Siegel wrote this book in 1938. This book was prevalent back then.

Superman is the featured character in this book. And, Trigger and Derek Niles are the antagonists. Some other supporting actors are George Taylor and Lois Lane.

Since this book was released in 1938, the original release is rarely found these days. So, this book was sold for an astonishing price of $414,000.

This book is based on the story of Spiderman. Spiderman is the protagonist of the book. And there are several other supporting characters. The book reads about how Spiderman saved New York City from a big disaster.

Batman#1 is the first book of the series. This book is based on the story of a mighty superhero named Batman. Bill Finger wrote this book in 1940.

Batman is the protagonist, and Joe Chill is the antagonist of the book. And, other supporting characters are Martha Wayne and Thomas Wayne.

This book was initially released in 1940. The initial copy of the book is rarely found nowadays. One of the copies was sold for a shocking price of $534,000.

Detective Comics#1 is the first book of this series. Greg Rucka wrote this book in 1937. It is one of the longest-running comic books.

The central characters of this book are Slam Bradley and Speed Saunders. There are many other supporting characters in the book.

Marvel Comics#1 is the first of its kind. Bill Everet and his group wrote this book in 1939. Many series of this book have been published.

The featured character of this book is Human torch. Anthony Sardo and Red are the antagonists. Carlo Zota, Mr. Harris, Mr. Harris’s secretary are other supporting characters.

Superman#1 was the first comic book that was entirely based on the actions of Superman. This was written by Jerry Siegel and Joe Shuster in 1939. There are more than hundreds of series of this book.

In the book, Superman is the protagonist, and Bea Carroll is the antagonist. And John Kent and May Kent are the supporting characters.

Since this book is the first book of the Superman series, it is pretty rare. So, one of the original copies of the book was sold for $731,000.

The featured characters of this book are Doctor Fate, Hawkman, Sandman, and Spectre. The antagonists are Boss Williams, Butch, and Sam Brent.

Since this book was released in the 40s, it is pretty rare nowadays. The book sold for a record-breaking price of $936,000.

Detective Comics#27 is the 27th comic book of the series. Creig Flessel wrote this book in 1937.

These comics are scarce these days, so various books of this series are sold for a very high price tag. This particular book was sold at a record-breaking price of $2,230,000.

The most valuable comic book on our list is Action Comics#1. Jerry Siegel wrote this book in 1938. this book used to sell for 10 cents in the initial days of its release. It is based on the actions of Superman.

Action Comics#1 is considered to be the first book containing a superhero story. There are only 100 copies of this book. The original publishers of this book are DC publishers. Also, this book sets the world record for being the most expensive.

The protagonist of this book is Superman, and the antagonists are Bea Carroll, Alex Geer, and Butch Matson. There are other supporting characters like John Kent, Lois Kent, and George Taylor.

The book reads the story about how superman saves the world fighting the old scientists.

Top 10 Point Guards in the NBA 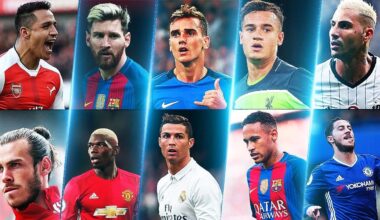 Read More
Soccer is one of the most-watched sports all across the world. On average, 3.6 million people watch soccer…
TTop List
Tai Lopez Books!!! Want some precious book recommendations? Don’t worry! You won’t need to waste your time searching…