A former professional basketball player associated with National Basketball Association (NBA), Charles Barkley has a net worth of $50 million.

Charles Wade Barkley is a retired NBA basketball player currently an analyst on the Inside the NBA show.

Furthermore, his nickname was “the Round Mound of Rebound” during his NBA career.

The Naismith Memorial Basketball Hall of Fame has named him twice into their Hall of Famers’ list.

He was born in Leeds, Alabama, U.s. in 1963 and had dreamed of being a future NBA basketball player.

Similarly, he played basketball for three seasons as a power forward for the Auburn college basketball team.

Besides, he was famous for amazing blocked shots and crowd-pleasing dunks.

In fact, Charles was a very versatile player and has been named 11 times in the All-star NBA team.

Barkley even has his own TV show called The Racecard on TNT (American TV network).

In the 1993 NBA season, Barkley became the NBA’s most valuable player.

In addition, NBA has retired his jersey number 34 in honor of Charles Barkley.

Let’s lookout for some quick facts about the former NBA star, Charles Barkley

Charles Barkley, a retired professional NBA player, has an astounding net worth of $50 million.

This huge net worth is generated from his Professional career, salary from his NBA analyst job in TNT, his real estate, and the endorsement deals.

Altogether, Barkley earned a staggering $40.3 million in for playing career in NBA.

In his final season with Houston Rockets in 1999, he earned $9 million; besides, it was his career’s high salary for a season.

Currently, this former basketball player is an analyst of NBA games on the TNT network.

Even though he has retired as an NBA player, he is involved in NBA as an analyst of NBA games.

Charles  Barkley has an estimated salary of $6 million per year for his NBA analyst job.

Likewise, He also made huge sums of money via endorsement deals with Nike and Adidas.

Unfortunately, Barkley was into bad habits such as gambling, costing him around $10-30 million.

Charles Barkley was raised by his mother alone; when he was 3 years, his father had abandoned the family.

Later, his mother remarried and had two sons with his stepfather, but sadly when he was 11 years old, his stepfather passed away due to a car accident.

Unfortunately, Barkley was not good enough to make his mark in basketball during high school.

But, he improved his playing and was able to grab the attention of the head coach of Auburn University.

Moreover, he played as a power forward for the Auburn University basketball team.

Barkley was named Southeastern Conference (SEC) Player of the Year during his time at Auburn.

Soon after, NBA team  Philadelphia 76ers signed him in 1984.

After retiring from a professional NBA career, he took the job of an analyst on Inside the NBA.

In addition, he used to play gambling a lot, but now this habit is long gone.

Now, Barkley lives a luxurious life in his glorious mansion with his gorgeous wife Maureen Blumhardt and kids.

Former NBA star player is a gregarious personality and loves to travel, relax and have quality time.

In 1990, Charles went to Philadelphia, where he enjoyed golf with Mike Schmidt and Michael Jordan.

Moreover, he traveled to, California where he was seen relaxing next to the pool in Dana point.

Charles owns a luxurious house in Scottdale, Pennsylvania, which he bought in the 1990s.

Further, he bought this beautiful house for $2 million with 6 bedrooms and 5 bathrooms with an area of 6,000 square feet.

NBA star has bought land around the house and has expanded; thus, it is even larger.

Moreover, this house now has a garage with 8 cars, a swimming pool, a huge backyard.

The backyard is so huge it fits perfectly to enjoy sunny Arizona days, features tennis courts to play golf, and has many trees around.

Besides, he also has a house in his hometown Alabama that has been put up for sale.

This memorabilia hose has been kept on sale to build affordable housing for families with low household incomes.

He’s on “Inside the NBA,” a post-game show where Barkley and other former NBA stars recap NBA games that took place during the day.

Moreover, He was also the studio analyst for joint coverage of NBA games for CBS.

Likewise, Barkley has worked as an analyst on all Final Four programs since 2011.

Recently, he has announced plans to retire from television in 2023.

In 2005, Charles appeared alongside swimsuit model Carolyn Murphy on The Tonight Show with Jay Leno, where Carolyn compared hand sizes with Charles.

Moreover, In 2007 he created an unforgettable TV moment by making pizza on The Jay Leno Show.

Charles Barkley has made private investments in various companies totaling $3 to $5 million.

Specifically, it is estimated that Charles makes about $1 million a year from his investments.

Furthermore, he has made an entertaining commercial with Nike titled Godzilla vs. Barkley.

Charles Barkley is a fan of “McDonald’s” and has done a commercial for the fast-food giants “McDonald’s.”

Likewise, Barkley has made a series of comedic commercials with Dwayne Wade for the T-Mobile company.

Moreover, his most shocking and, of course, the hilarious commercial was for Weight Watchers.

In 2011, Barkley teamed up with Weight Watcher for a commercial in which he was seen wearing a dress with the slogan “Lose it Like A Man” to mention that weight-reduction plan isn’t always only for women.

Charles Barkley was selected by the Philadelphia 76ers in the 1984 NBA Draft.

In the 1986/87 season, he was the team leader, and the following season, he became the Sixers team star player.

During his tenure with the Sixers, he played in six All-Star games, and he became NBA’s Most Valuable Player twice.

Further, In July 1992, Charles played for the Phoenix Suns, where he had a career of 5.1 assists per game, which led the Suns to finals.

Furthermore, He was named the Most Valuable Player of NBA and qualified for his seventh All-Star game.

Likewise, Barkley had earned All-NBA and All-Stars honors, along with a career-high free throw of .777.

Barkley competed in the 1992 and 1996 Olympics and won two gold medals as a member of the men’s basketball team for the United States.

Likewise, He was part of the  “Dream Team” at the 1992 Olympics, which consisted of great teammates like Magic Johnson, Larry Bird, and Scottie Pippen, and won a gold medal as part of the men’s team.

The Dream Team made history with its incredible roster.

Moreover, he was inducted into the Naismith Memorial Basketball Hall of Fame in 2010.

In 1994, Barkley again led the United States to the Olympics gold medal.

Then, Charles played for the Houston Rockets in 1996 and got off to a difficult start; however, he became the second-leading scorer.

On April 19, 2000, he left the court with a standing ovation and immediately retired.

Eventually, he ended his 16-year career on a high note.

Barkley a relief fund for Corona Virus Pandemic, which would help financial assistantship to hospital staff in need.

In 2015 Charles made donations of $3 million to different charities.

Secondly, he contributed $1 million to Clark Atlanta University in Atlanta.

And lastly, he donated $1 million for the charity called the Wounded Warrior Project.

Moreover, Ante Up For Africa, ENOUGH Project, LIVESTRONG, Not On Our Watch, Stand Up To Cancer, United Service Organization are some of his other charities.

In his junior year at Leeds High School, Barkley was only 5 feet 10 inches and weighed 220 pounds.

However, the following summer, he grew six inches and became a starter on the college basketball team.

Barkley’s first year with the Phoenix Suns was his most successful; as a matter of fact, he averaged 25.6 points, 12.2 rebounds, 5.1 assists, 1.6 steals, and 1 block per game and received his first (and only) league MVP award.

Barkley has been an NBA Studio Analyst for TNT Network since 2000 and has received three Sports Emmy Awards for Outstanding Studio Analyst.

What is Charles Barkley’s Height and Weight?

What was Charles Barkley’s vertical jump?

Despite his weight of 114 kg, he has an outstanding 39-inch vertical leap and terrific quickness.

Does Charles Barkley have a son?

No, he doesn’t have a son but has one child, a daughter named Christiana Barkley. 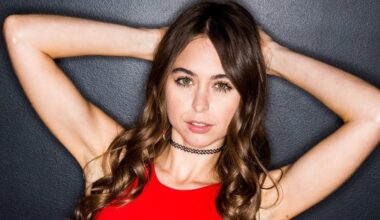 Read More
An American adult film actress, stripper, and social media personality Riley Reid has an estimated net worth of…