There are merely such things in which the United States does not have its name. Well, we can say without a doubt that America is a land of beautiful women.

Hence, in this very article, we are going to talk about those 18 beautiful women from the United States who have been loved by millions of fans across the globe.

Most of these women are actresses, which is quite a normal thing as celebrities get the maximum exposure in media, and thus, the world recognizes them.

These astoundingly talented yet breath-taking beauties must be your favorite as well. Let’s begin right away with their quick overview!

Olsen, born in California, began acting at the age of four and at one time almost left acting. Thank God she did not!

The world has become a fan of her ever since she made her appearance in MCU movies as “Scarlet Witch” or Wanda Maximoff.

Olsen was ranked 38th on the list of Most Beautiful Women in the World in 2021. With a slim build figure, Olsen possesses a gorgeous symmetrical face and a stunning body.

Her very recent film Doctor Strange in the Multiverse of Madness was a superhit where Elizabeth Olsen delivered a groundbreaking performance along with Benedict Cumberbatch.

One of Hollywood’s most attractive actors and models, Dakota Johnso,n is widely known for her role in the Fifty Shades of Grey film franchise.

With a lovely face, attractive personality, and an hourglass figure, Dakota Johnson is often ranked in the list of sexiest American women.

To name a few of her popular flicks, Johnson has done a commendable job in the movies like The Peanut Butter Falcon, Black Mass, Suspiria, Bad Time at El Royale, and many others.

The daughter of Kris and Caitlyn Jenner, Kendall Jenner is one of the biggest names in today’s fashion industry.

While Jenner started her modeling career at the age of 14, she rose to popularity after appearing in Keeping Up with the Kardashians.

Every now and then, Kendall is picked as the prettiest Kardashian-Jenner sibling for being naturally beautiful and for all those beauty genes she has.

Well, the heart-shaped face, defined cheekbones, and stunning height are the major three things that set Kendall apart from other regular models.

Talking about endorsements, the world’s highest-paid supermodel is the face of Estee Lauder.

Now, who does not love Selena Gomez?

Similarly, there are millions of fans who adore Selena for her cutest smile and never-fading charisma.

Gomez kicked off her acting career with Barney & Friends and rose to shine after playing the role of Alex Russo in the Wizards of Waverly Place.

As of today, the singer has established herself as a producer and businesswoman. Similarly, Selena is the fifth-most followed person on Instagram with a current 320 million followers!

One of the biggest names in the current entertainment world is Gigi Hadid, who is the world’s most famous American fashion model.

Gigi received The International Model of the Year award in 2016, presented by The British Fashion Council.

The blonde hair, blue-green eyes, and an hourglass-shaped beauty have appeared on the cover of Vogue magazine 35 times.

In the year 2014, Gigi already had made her name on the list of Top 50 Models of the World, and today, she is moving towards the top of it.

Likewise, Gigi is a mother of a child she had with a well-known singer, Zayn Malik.

We have Demi Moore as our next name on the list of the most beautiful American actress, who is also one of the most prolific actresses in Hollywood.

Moore is widely known for her starring role in the film “Striptease” for which the actress was paid $12.5 million, which was the highest-paid sum of that time (the mid-1990s).

On that note, Demi is regarded as a pioneer in the fight for equal pay for women in Hollywood.

Now talking about the looks, she has been listed as the world’s most attractive woman several times by different magazines and has captured us with her beauty over the years.

Coming forward, we have Scarlett Johansson on our list, who has also been dubbed the new Hollywood Sex Symbol by a few media websites.

The gorgeous blonde actress with a charming personality has also time and again appeared on Forbes’ Celebrity 100 list. Moreover, Johansson is one of the highest-paid actresses on the planet.

In the year 2007, the diva was dubbed the Sexiest Celebrity of the Year by Playboy magazine.

Some of the best works of Scarlett Johansson can be witnessed in the movies like Marriage Story, Lucy, Black Widow, Rough Night, and several others.

The most successful pop musician of the 1990s, Britney Spears, is widely known as the “Princess of Pop.”

Britney is an American singer, dancer, and songwriter who was the highest-paid female artist in 2012 as, for almost two whole decades, she ruled over pop music.

Her major hits like “Hit Me Baby One More Time,” “Oops!… I Did It Again,” and “Crazy” are still globally popular.

The singer was renowned for resurrecting adolescent pop during her era and, of course, being one of the hottest Americans to do so.

On the number 10, we have Jessica Alba, the stunning actress and businesswoman from the United States.

Nonetheless, Alba rose to prominence after starring as the lead actress in Dark Angel, a 2000 sci-fi TV series.

On several occasions, Jessica has made her name on the list of the world’s sexiest and most desirable women.

Make some room for the queen B!

The most nominated and awarded female artist in the history of Grammys, Beyoncé Knowles, is one of the most beautiful and talented women out there and not just in America.

At the age of 19, Beyoncé won her first Grammy today; she has a hold of a total of 28 Grammy Awards.

Beyoncé is not just brilliant and beautiful but an inspiration to millions of her fans throughout the globe.

As for her looks, the singer slays every attire she puts on. Likewise, the 40-year-old black beauty has topped the list of the world’s most attractive women several times.

Bold, out-spoken, beautiful, talented, and now a doctor! This is Taylor Swift for you all.

In 2019, Taylor was named one of the Most Influential People in the World by Time Magazine.

Similarly, Swift was honored as Woman of the Decade by Billboard in the year 2019. The same year, she received the title of Artist of the Decade presented by the American Music Awards.

Successful in establishing herself as the new-age Hollywood sex icon, Megan Fox is a stunning American actress and model.

The actress rose to fame with the hit action flick Transformers. In recent times, there is no such list of attractive ladies where Megan misses a spot.

Fox’s stunning figure, scorching luscious lips, and captivating eyes have corroborated her as one of the gorgeous American divas. In fact, she is frequently compared to Angelina Jolie.

Megan has already graced the covers of numerous famous magazines like Rolling Stone, FHM, Maxim, Elle, GQ, and many more.

Another pinnacle of beauty and glamour, we are talking about none other than Jennifer Aniston, who looks forever young and possesses one of Hollywood’s greatest bodies.

Jennifer’s flawless beauty and confident personality make anyone fall in love with her. Oh, and her hairstyle is famous worldwide.

Aniston is most recognized for portraying the role of Rachel in the hit sitcom F.R.I.E.N.D.S. Moreover, she has starred in numerous other major film projects.

Born in 1987, Hilary Duff is a talented actor, vocalist, producer, songwriter, and businesswoman who has one of the most beautiful faces in America.

Similarly, the bubbly blonde diva has been twice nominated for the People’s Choice Award in the years 2016 and 2017.

While talking about the world’s most attractive ladies, there is no way anyone forgets this evergreen American lady- Julia Roberts. A mother of three gorgeous children is the impeccable personality Hollywood has.

Known for her killer grin and sizzling body, she is a successful actress in the professional world. Likewise, the list of her accomplishments is equally extensive.

Some of her best roles can be seen in the films like Notting Hill, Pretty Woman, Erin Brokovich, and Eat Pray Love.

The actress has time and often been dubbed as the most beautiful American woman. To detail, Julia has been ranked number one in 11 different polls taken for the world’s most attractive women.

The outstanding, luxurious, and extremely lovely Cameron Diaz is an acclaimed American former actress and model.

Her beautiful sea-green eyes and sculpted smile are often appreciated, not to forget those great sexy legs, even at the age of 49.

The actress was one of the most notable and highest-paid actresses of her time. Sadly, in 2018, Diaz announced her retirement from cinema and other big screens.

Talking about her iconic roles, films like Charlie’s Angels, There’s Something About Mary, The Mask, and My Best Friend’s Wedding supported her to receive worldwide fame.

It comes as no surprise to see the name Angelina Jolie on the topmost rank of beautiful American women.

Jolie, the notable actress, is brilliant in her acting profession and equally humble in real life. To detail, the actress is highly invested in humanitarian works.

Previously, she was married to Brad Pitt, with whom she had three children.

Talking about some of her well-known cinematic roles, she is famous for acting in Jia, Mr & Mrs. Smith, Tomb Raider, and Girl Interrupted.

The stunning diva is known for her gorgeous blue eyes, while those tempting lips and legs are also her prominent features.

Without a single doubt, we have Marilyn Monroe on the top of our list.

One of America’s sexiest and most beautiful women, Marilyn Monroe, was born Norma Jeane Mortenson. She is typified as the Hollywood sex symbol for her incomparable beauty and enticing demeanor.

Monroe has influenced the world with her sheer acting talent, sultry voice, and seductive looks. Those champagne blonde curls with her innocent yet confident personality made her one of the most famous women of all time.

It has already been more than six decades since her passing away, however, the world has never once forgotten her legacy nor ever will. 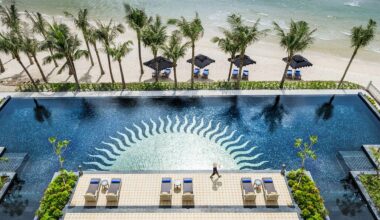 Read More
Best Hotels in Asia!! Hotels are unquestionably one of the fastest-growing elements of the tourism industry. To detail,…