The man behind the creation of one of the most popular TV shows of all time, Family Guy, Seth MacFarlane, has a net worth of a staggering $300 million.

MacFarlane is probably the most talented person to have ever walked on the face of planet Earth.

He is an actor, screenwriter, producer, comedian, singer, film director, and most importantly, an animator.

The guy is an unlimited supply of humorous writing which he has brilliantly capitalized into money-making.

Like, how do you even get the idea to make a film on a teddy bear and not just an ordinary film, a box office smash?

Seth has been recognized well for all his quirky works in the entertainment industry.

He was inducted into the Television Hall of Fame in 2020.

The modern-day Renaissance man or jack of all trades if you will, Seth MacFarlane’s net worth as of June 2022 is a whopping $300 million.

Hollywood is pretty generous if one has a talent, create just one hit TV show for a major network, and boom, you will never go broke again till you release your last breath.

Mr. MacFarlane has managed that feat not just once or twice but three times with blockbuster TV shows Family Guy, The Cleveland Show, and American Dad.

Aside from that, he has produced, directed, and written numerous hit films, which have grossed over $700 million in the global box office.

Nonetheless, with the show’s success, Fox was forced to agree on the deal Seth proposed.

Seth successfully negotiated an enormous $100 million five-year deal in 2009 to run his animation empire with the network.

The deal was the priciest and largest in TV history up to that point.

Aside from the deal, Seth bags an additional $20 million each year from merchandise and DVD rights.

Fox network almost passed the chance to start what would later become one of the most-watched and lucrative shows in television history.

Lucky for them, after the surprise success of their 1997 show ‘King of the Hill‘, the network invited Seth back.

However, they only allocated $50,000 to produce the pilot of the show, while most animated primetime shows at the time had a $1 million budget.

After six months of exhausting and tiresome work, Seth finally came up with the pilot. The executive at Fox loved it and immediately ordered a full season. And Mr. MacFarlane was only 24 at the time.

The first season performed well to earn second, and here we are after two decades with 20 seasons and billions of dollars in revenue.

The show has been syndicated globally in numerous languages and countries.

The single syndicated episode of the show sold for a massive $2 million.

Similarly, retailers including Wal-Mart and Target have licensed more than 500 Family Guy-related toys and items, generating $100 million in revenue each year.

Aside from that, Seth is a Grammy Award-nominated singer who earns pretty well from royalties of his six studio albums.

Let’s check out Seth MacFarlane’s net worth in different currencies, including the infamous crypto BitCoin.

Seth has literally an unlimited supply of money, and he is not vague about it. Rather than spending them on useless and flashy stuff, he has invested a good chunk of money in real estate.

He has called a large Beverly Hills, California estate, home since 2008. He purchased the mansion for a massive $13.5 million.

However, it is not the only property Seth owns. He also has a large mansion in Malibu, California, which he purchased in 2019 for $15.7 million.

Seth has been called many things, but immodest is not one of them.

A humble guy, Seth is not much into automobiles spending spree but still owns modest cars.

So in total, Seth has around $2 million worth of car collection.

He does not support or follow any religion whatsoever. In fact, he has referenced his criticism of religion throughout the TV show Family Guy.

Moreover, from 2012 until 2013, Seth dated Emilia Clarke, and even the couple separated, they have remained on good terms.

McFarlane’s mother died from cancer on July 16, 2010, and the death was reported on Larry King Live by Larry King.

Did you know that the only reason we still have Seth today is that he missed his flight by a mere 15 minutes?

Yes, you read that right.

Seth was scheduled to return to LA on American Airlines Flight 11 from Boston on September 11, 2001, the same flight that was hijacked and flown into the World Trade Center, killing everyone on board.

He made it to the airport, but gates had been closed because he was suffering from the previous night’s hangover, followed by his speech at the Rhode Island School of Design, his alma mater.

The incident was referenced in the Family Guy’s Boy (Dog) Meets Girl (Dog).

Aside from his entertainment and animation empire, Seth is also known for his political views and philanthropy.

Seth is pretty vocal about his support for gay rights.

While Seth’s been a consistent donor to political campaigns, his nonpolitical charity is somewhat random.

In 2009 he founded Seth MacFarlane Foundation to facilitate his nonprofit works, but the foundation does not appear to have a specific charitable goal or a website.

Nonetheless, his most significant donations include $500,000 to Los Angeles public radio and $2 million to NPR.

Seth MacFarlane has an impressive portfolio in the entertainment industry. Be it acting, directing, producing, writing, or even soundtracks, he has done it all and is pretty good.

According to IMBd, he has 34 credits as a writer that include the shows such as American Dad, Family Guy, The Orville, The Cleveland Show, Seth MacFarlane’s Cavalcade of Cartoon Comedy, among others.

Similarly, as an actor, Seth has appeared in all his written TV shows and voiced in films such as Ted and Ted 2.

Aside from that, Seth has hosted several TV shows, including Saturday Night Live, 85th Academy Awards, and Comedy Central Roasts.

Seth has endorsed a handful of products over the course of his career.

In 2012 he endorsed AXE Hair. Similarly, he also appeared in the commercial of hulu.com in 2009.

As for his investments, Seth has invested a good chunk of his money in real estate.

Similarly, he owns a couple of production houses and record labels, including Republic Records, Verve Records, and Fuzzy Door Productions.

Read About The Most Successful Comedians

The Family Guy creator was born in a small town in Connecticut called Kent.

Seth was very much interested in illustrations and animations as a child and hence, made a decision to pursue a career in animation when he was just five.

He published his first comic book Walter Crouton at the age of nine. The comic book was published weekly in The Kent Good Times-Dispatch.

It not only published Seth’s work but also paid him $5 a week.

He began making short films with his parent’s video camera in high school.

Later, Seth enrolled in Rhode Island School of Design, where he studied animation, video, and film.

How many-voiced does Seth MacFarlane do in Family Guy?

MacFarlane voices four of the main characters in Family Guy.

Seth is behind the voice of Stewie Griffin, Peter Griffin, Brian Griffin, and Glenn Quagmire.

Who does the Seth MacFarlane voice in The Simpsons?

MacFarlane voiced tons of characters in The Simpsons, including Peter, Brian, and Stewie Griffin.

Mila Kunis has revealed that Ted director, Seth, is one of her closest friends.

Kunis actually worked in Family Guy as a teen.

NNet Worth
The American actor, writer, and producer Josh Gad best known for his role as Voice-over of Olaf in…
NNet Worth 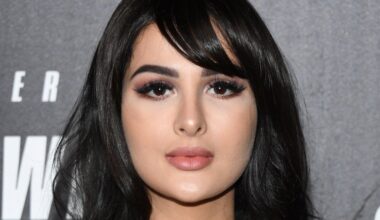 Read More
Alia Marie Shelesh, popularly known as SSSniperWolf’s net worth is $6 million as of . SSSniperWolf is a…