Robyn Rihanna Fenty, aka Rihanna, has a gigantic net worth of $1.7 billion as a singer, songwriter, fashion designer, actress, and businesswoman.

She is one of the bestselling music artists of all time, with more than 250 million records sold globally.

Similarly, the singer has as many as six Guinness World Records in different categories.

Likewise, she is the recipient of an astounding nine Grammy Awards, 12 Billboard Music Awards, and thirteen American Music Awards.

Moreover, Time Magazine named her among the 100 Most Influential People in the World in the year 2012 and 2018.

Furthermore, the Government of Barbados appointed her as an ambassador of education, tourism, and investment in 2018.

Rihanna Net Worth and Income

Barbados-born singer, songwriter, actress, philanthropist, and businesswoman Rihanna, has a net worth of a whopping $1.7 billion as of September 2022.

A large portion of Rihanna’s net worth is attributed to music and even larger to her business endeavors.

Similarly, Rihanna typically makes about $40-$80 million from her ever-expanding empire.

Surprisingly, music sales make up the smallest chunk of the $1.7 billion net worth of Rihanna.

She has sold over 150 million singles and 41 million albums worldwide to date. After doing all the math, we came up with a surprising figure of $49.4 million in total.

However, that is not the case for tours and concerts.

After that, her tour income steadily increased over time, but the most lucrative tour came in the 2013 Diamonds world tour, which added a whopping $121 million to Rihanna’s net worth.

As for her part of the earrings from tours, a star with a stature as big as Rihanna’s takes 85% of its box office collection.

Apart from physical album sales and tours, Rihanna also earns from her online platforms, including YouTube, Spotify, and Instagram.

As of 2021, Rihanna’s official YouTube channel has over 38 million subscribers and over 18.6 billion views.

The channel has earned about $61.58 million to date.

Similarly, she has over 46 million monthly listeners in her Spotify, and we are sure she makes a sizable amount from that as well.

Last but not least, Rihanna has 111 million followers on her Instagram profile as of 2021, and it is safe to say that she makes about $500,000 every time she shares a sponsored post.

Besides that, Rihanna also makes a good deal of money from her endorsement deals and business ventures.

She has endorsed brands such as Puma, Armani, and Covergirl, among others.

Rihanna’s Net Worth in Different Currencies

Let’s have a look at Rihanna’s net worth in different currencies.

The superstar singer Rihanna splashed over $13.8 million for a stunning mansion in Beverly Hills in March of 2021.

Similarly, she also owns several multimillion dollars mansions in her hometown of Barbados.

Moreover, Rihanna bought a gorgeous mansion in Hollywood Hills in 2017 but went through a frightening break-in a year after buying.

She listed the property after six months of the incident for $7.5 million. However, she has not been lucky in terms of her sale and is renting the property for $35,000 per month.

Furthermore, Rihanna also purchased a condo in the Century City neighborhood of Los Angeles in October of 2014.

Likewise, pop sensation possesses a mansion in Pacific Palisades, which she purchased in August of 2012. She purchased the 11,000 square feet mansion for a whopping $12 million.

Just like her real estate, Rihanna has splashed a tiny portion of fortune to acquire some of the sickest rides that suit her bold personality.

She is always on the run either for her music or her numerous businesses. That’s what happens when you dip your feet in everything, I guess.

However, whenever she gets free time, she enjoys her hobbies and travels for a holiday.

Her hobbies include dancing, shopping, of course, watching movies, and paddleboarding.

Similarly, she is a real shopping freak and spends a portion of her accrued wealth in purchasing luxury goods and other items.

One of the favorite brands that Rihanna shops for include Christian Louboutin.

Moreover, Rihanna has traveled to almost every exotic travel destination planet Earth has to offer.

She has been spotted in St. Tropez on numerous occasions. Similarly, back in 2012, the Barbados native jetted off to her hometown to spend her Christmas holidays.

One of the best-selling music artists of all time, Rihanna is also known for her philanthropic acts.

In 2020 alone singer donated about $8 million in order to support Coronavirus relief.

Back in 2012, she founded her own nonprofit foundation named Clara Lionel Foundation.

Through her own foundation, she has given over $2 million to help abuse victims in LA and also $5 million to several other charities.

Besides her music and businesses, Rihanna has also appeared in several movies and TV series over the years.

Similarly, she also did voice-over work on the 2015 animated film ‘Home.’

Along with several of her businesses, Rihanna co-owns a digital music streaming platform Tidal.

The collaboration proved out to be extremely successful as it did $100 million in revenue in its first two months.

The brand’s total value is between $2 to $3 billion.

However, Fenty is not the only billion-dollar brand she owns.

In addition, the superstar also co-owns the lingerie brand Savage X Fenty. The brand was launched in 2018, and Rihanna owns about 30% of it. The overall valuation of the brand is about $1 billion.

She has served as a brand promoter of several high-end brands such as MAC Cosmetics, Armani, Dior, Covergirl, Secret Body Spray, River Island, Gucci, and Clinique.

Most notably, she signed a $25 million deal with South Korean multinational manufacturing conglomerate Samsung in 2015.

Moreover, she also became the creative director of the sportswear Puma in 2014, overseeing the brand’s women’s line.

Read about ASAP Rocky’s Net Worth

Rihanna signed a six-album recording deal in 2004 with Def Jam Records after the then CEO Jay-Z heard the demo.

She worked with several artists, including the CEO Jay-Z, on her debut studio album “Music of the Sun,” which was released in August of 2005.

Following the success of the debut album in April of 2006, Rihanna released her second studio album entitled “A Girl Like Me,” which was certified platinum by RIAA.

Moreover, the third album, “Good Girl Gone Bad” was released in 2007. It received positive reviews from the critics, and the title track ‘Umbrella‘ featuring Jay-Z himself sold over 8 million copies globally.

It also garnered her a Grammy Award in 2008 for Best Rap/Sung Collaboration.

Who is Rihanna in a relationship with?

As of 2021, Rihanna is in a relationship with rapper A$AP Rocky.

Is Rihanna the richest female artist?

Yes, Rihanna is officially the richest female artist as of 2021, with a net worth of a staggering $1.7 billion.

Does Rihanna have a child? 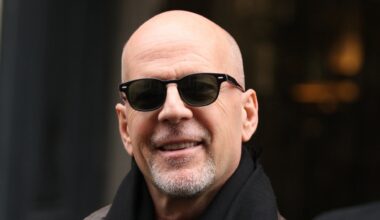 Read More
“Yippie-Kai-Yay,…!!” The man who coined this iconic catchphrase in the Die Hard movie, the one, and only Bruce…
NNet Worth
Carson Wentz, the National Football League (NFL) player, has a staggering net worth of $45 million. Further, He…