21 Richest Authors in the World

21 Richest Authors in the World!

Yes, you definitely can make a good living with your power of imagination and penning down your ideas.

As a matter of fact, you can make billions as a writer like some of the authors in this article.

However, penning down the words to come up with a novel or book is not an easy task.

Just like any other physical labor, writing needs much mental as well as physical energy.

You never know what your audience wants from you, and the beauty of writing solely lies in the reader’s mind.

Nonetheless, an author who can mesmerize their audience with the magic of their words is the one who can garner all the money they want.

And no, the Harry Potter franchise author J.K Rowling is not the richest author on our list.

Before starting with the article, can you guess who is on the top of the list?

Here is a quick overview of the 20 Richest Authors in the World.

Richest Authors in the World

An American children’s author and cartoonist, Theodor Seuss Geisel, better known as Dr. Seuss, had a net worth of $75 million at the time of his death.

Over the course of his career, Dr. Seuss authored more than 60 books.

Theodor published his first book, “And to Think That I Saw It on Mulberry Street,” in 1936.

Some of his most known works include The Lorax, If I Ran The Zoo, Green Eggs and Ham, The Sneetches, and The Butter Battle Book.

Interestingly, even after his death licensing revenue generates $30-$40 million per year for Seuss Enterprises, which was established by his widow Audrey after his passing.

Dr. Seuss has consistently been on the list of Highest Earning Dead Celebrities over the past decade.

An American author, radio host, former television host, and political commentator Bill O’Reilly has a net worth of a whopping $85 million as of October 2022.

He is mostly known as the host of The O’Reilly Factor on Fox.

During the peak of his show, he earned about $25 million per year from Fox alone.

Out of his several professions, Bill’s major money draw currently is his book royalties and podcast.

The man has written over 15 books, of which several have made it to the top of the New York Times bestsellers list.

His 2006 book Culture Warrior sold over a million copies within the first months of its release.

Henry “Harry” Patterson, better known by his pen name Jack Higgins was a British author who had a net worth of $86 million at the time of his passing in 2022.

The best-selling author Jack is known for his thrillers and espionage novels.

His 1975 novel The Eagle Has Landed sold over a staggering 50 million copies worldwide.

Some of his other notable works include Thunder Point, Angel of Death, The Eagle Has Flown, and Flight of Eagles.

The author, with more than 85 novel credits to his name, sold over 250 million copies worldwide.

An American TV writer and novelist, Suzanne Collins, has a net worth of $90 million as of October 2022.

She is best known for her New York Times best-selling series The Hunger Games and The Underground Chronicles.

Suzanne began her career as a writer for children’s television shows in 1991 and has since authored many bestselling novels.

Her books have collectively sold over 85 million copies worldwide, making her one of the best-selling authors of all time.

A British self-help book author Paul McKenna’s net worth is a whopping $100 million as of October 2022.

Along with being a best-selling author, Paul is also a hypnotist.

Paul has become one of the most successful and richest non-fiction writers with his titles, I Can Make You Happy and I Can Make You Thin, among others.

The author of the tremendously popular “Twilight” book series Stephenie Meyer’s net worth as of October 2022 is a staggering $120 million.

The “Twilight” series sold over 100 million copies worldwide and has been adapted into five film series, which have collectively grossed more than $3.3 billion at the global box office.

An American author and TV producer, George R.R. Martin, has a net worth as of October 2022 is a staggering $120 million.

Martin is best known for his Sci-Fi/Fantasy novel series A Song of Ice and Fire, adapted into the popular HBO series Game of Thrones.

Similarly, his 2018 novel Fire And Blood has been adapted into the prequel series to Game of Thrones, House of Dragon, which is set to be released on August 22, 2022.

His per season salary was $15 million on the HBO series Game of Thrones.

He earned a total of $200 million from the series, with the potential to make much more with future spin-offs.

With a massive net worth of $140 million, Janet Evanovich holds the 14th spot on our richest authors list.

The American author has a number of best-selling novel credits to her name, and her books have been translated into 40 different languages worldwide.

An Indian-American author Deepak Chorpa has a net worth of $150 million as of October 2022.

Along with being an author, he is also a doctor, guru, businessman, and alternative medicine practitioner.

His books have sold more than 20 million, making him one of the best-selling authors in the world.

Brown is best known for his best-selling novel The Da Vinci Code, which was adapted into two movies that starred superstar Tom Hanks.

His books have sold over 250 million copies worldwide.

In a typical year, Dan earns around $20 million from his book and movie royalties and other endeavors.

One of the best-selling authors, Dean Koontz’s net worth as of October 2022 is $200 million.

Koontz’s 14 hardcovers and 14 paperbacks have reached number one on the New York Times bestseller list.

He has sold more than 450 million books worldwide.

An English politician and author Jeffery Archer has a net worth of $200 million.

From 1969 to 1975, Jeffery served as a Member of Parliament for Louth. However, he resigned from his duty because of a financial scandal that left him nearly broke.

From 2001 to 2003, he was imprisoned for perjury and perverting the court of justice.

His imprisonment inspired many of his books which have collectively sold over 250 million copies worldwide.

The British-American novelist Barbara Taylor Bradford has a net worth of $300 million.

She is best known for her debut novel, A Woman of Substance, published in 1979.

The book sold more than 30 million copies worldwide, making it one of the Top 10 best-selling novels of all time.

An American author Nora Roberts has a net worth of $390 million as of October 2022.

She began writing in the late 70s.

Nora earned $18 million in 2014 from books, royalties, and other pursuits.

A prominent American author John Grisham has a net worth of $400 million.

His books have sold over 300 million worldwide.

Grisham made his debut in 1989 with A Time to Kill and has since written 28 consecutive number one bestsellers.

He makes around $50 to $80 million yearly in book royalties and advances.

An American horror, supernatural fiction, suspense, and fantasy novelist Stephen King has a net worth of $500 million.

King has published more than 60 novels as of this writing, with over 350 million in worldwide sales.

However, he sold the paperback rights to the book for $400,000, which equates to about $2.3 million after adjusting for inflation.

The author of the best-selling novel “The Alchemist,” Paulo Coelho, has a net worth of $500 million.

In addition to writing books, Coelho is also a musician and lyricist.

He has sold over 320 million books worldwide, which have been translated into 83 different languages.

Similarly, his work has been published in 170 countries around the world.

With 180 books and 800 million copies sold worldwide, Danielle Steel is one of the best-selling authors in the world.

The American novelist has a staggering net worth of $600 million as of this writing.

More than 20 of her books have been adapted into films and series.

With an earning of $23 million in 2014, Forbes ranked her eighth on its list of World’s Top-Earning Authors.

Similarly, she made $35 million in 2013 from book and movie royalties and other business pursuits.

An American producer and best-selling author James Patterson has a net worth of $800 million.

The Guinness World Record holder James earns anywhere between $70 and $90 million per year from his book royalties and other businesses.

Each year he is one of the five highest-paid authors in the world.

The first billionaire author J.K. Rowling is known for her Harry Potter series.

One of the richest private citizens in the United Kingdom, J.K Rowling’s net worth is $1 billion.

Her Harry Potter fantasy series has sold more than 500 million copies since debuting in 1997.

In a typical year, Rowling earns an average of $50 to $100 million from her various pursuits.

From an unemployed single mother living on welfare to the second richest author in the world, J.K.’s story is an inspiration to everyone who thinks less of themselves.

Rowling has donated more than $150 million to date to various charities globally, proving she is equally generous with her fortune as with her words.

With a net worth of $1.7 billion, Elisabeth Badinter is the richest author in the world.

However, Elisabeth did not earn her place among billionaires as a professor or author.

Elisabeth is the largest shareholder of a multinational advertising and public relation company Publicis Groupe which she inherited from her father.

Moreover, her best-known work as an author is the European bestseller “The Conflict: How Modern Motherhood Undermines the Status of Women.” 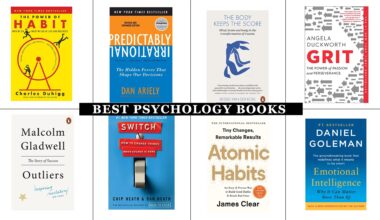 Read More
In this article, we have compiled the list of the best psychology books in , along with their…