The National Hockey League (NHL) is a professional ice hockey league that is considered one of the most important leagues in the United States and Canada.

This North American ice hockey league consists of 32 teams, with 25 teams belonging to the United States, while the remaining are from Canada.

Undoubtedly, it requires great strength and stamina to pull off this sport which is why we witness several players flaunting their smoldering physique.

According to recent stats, there are more than 900 active NHL players originating from different countries. And, to choose a dozen of handsome hunks from this plethora is assuredly a difficult task.

However, we have tried our best to present the 12 best-looking NHL players. Let’s begin with a quick overview!

Born in Regina, Canada, Tyler Bozak is an ice hockey center who, at this moment, plays for the NHL’s St. Louis Blues.

Afterward, he left Toronto Maple Leafs and sealed the deal with St. Louis Blues on July 1, 2018. To add further, Bozak signed a three-year contract worth $15 million.

About Tyler Bozak’s personal life, he married Molly Robinson in 2017, and together they are blessed with three children.

Nick Schmaltz is an American professional NHL player born in Wisconsin. Schmaltz was drafted 20th overall by the NHL team Chicago Blackhawks in 2014.

Currently, the professional player plays for Arizona Coyotes. As of 2017, his salary is reported to be $832,500.

He grew up playing hockey with his siblings, and the love for this game has brought him this far.

With his ruggedly handsome look, we can bet that he must have been the girls’ favorite since he used to play hockey in college.

The tall and handsome ice hockey player born in Hodonin, Czechia, Michal Kempny, is tenth on our list of best-looking NHL players.

Michal plays for Washington Capitals and has contributed to this team winning the Stanley Cup in 2018.

Moreover, before signing the contract with Washington Capitals, Kempny had already played for the teams like HK 36 Skalica, HC Slavia Praha, Chicago Blackhawks, and some others.

Along with being a valuable player, he is one of the most attractive hockey players- thanks to his sizzling and appealing demeanor.

Nevertheless, his frequent leg injury has weakened him and made him more vulnerable to other problems.

Read about 12 Beautiful Wives of the NFL Players.

The next NHL player on our list is Brian Dumoulin, the talented ice hockey player and also one of the hottest.

At present, the professional player plays for the Pittsburgh Penguins of the National Hockey League. Nevertheless, he was first drafted by the Carolina Hurricanes in 2009.

Furthermore, this handsome hunk has twice helped the Penguins to win the Stanley Cup in the years 2016 and 2017.

In 2018, the ice hockey defender married Kayla Ermold, and together, they share a child.

On the list of the hottest hockey players, Ian McCoshen is ranked eighth, and we can’t argue with this.

The stunning and tall ice hockey defenceman was born in California and is currently just 26 years old. However, he has quite a fanbase for the fact he is handsome and plays great too.

To add further, Ian was picked by the Florida Panthers 31st overall in the 2013 NHL Draft.

Roman Josi was only seventeen years old when he won the attention of Switzerland’s top hockey division, proving himself to be the best Swiss ice hockey player in the history of the league.

Moreover, he is definitely one of the hottest and most charming players you will find in the crowd of NHL players.

In 2008, Roman was selected 38th overall by the Nashville Predator, the team he currently plays for.

To add more, the ice hockey defender is also captain of the Predators and known as the NHL’s most potent defenseman.

One of the finest former NHL players, Henrik Lundqvist, spent a fifteen-year career with the New York Rangers of the NHL.

Lundqvist was the brilliant goalkeeper whose name will always be remembered for the fact that he led the Swedish team to win the second Olympic gold medal in 2006.

The Swedish former player married Therese Anderson in 2011 and together have two beautiful children.

Read to Find Out Who are the Best-Looking NFL Players?

Alexander Wennberg is the fifth handsome NHL player on our list. The dashing Swedish player was drafted in 2013 by Columbus Blue Jackets in the 14th overall.

Even though this good-looking player has not won any Stanley Cup, he has still a long way to go.

Talking about his personal life, in February 2022, Wennberg got engaged to beautiful Felica Weeren.

Also known as Darryl or The Next One, Sidney Crosby is the captain of the Pittsburgh Penguins in the NHL.

Crosby was drafted in 2005 by the Penguins, and as of 2022, his salary is reported to be $9 million. Moreover, his overall net worth is estimated to be $55 million.

Not only is he rich and brilliant at the game, but he is also one of the best-looking NHL players in the world. His charming face has won the hearts of millions following ice hockey.

To detail, Sidney is also one of the youngest NHL players who scored 100 points in a season, and at the time, he was only 18 years old.

Yet another tall and handsome Swedish dreamboat! Jonathan Ericsson was born in Karlskrona, Sweden, and was drafted in the year 2002.

Currently, the Swedish defenseman is an unrestricted free agent. However, he previously was in the team of Detroit Red Wings.

In 2014, he married Evelina Ericsson, with whom he has a daughter named Liv Ericsson. To add further, Ericsson’s salary is mentioned to be $4 million.

Due to his adorable and stylish attitude, Jonathon at third position among the most good-looking NHL players.

The Canadian NHL player is often dubbed as the most handsome player in the rabble of ice hockey, and we thoroughly agree with that.

The right-winger of the Washington Capitals began playing ice hockey at the mere age of two, and today, he is the most celebrated NHL player.

Born and raised in Toronto, he was a part of the Stanley Cup playoffs in 2003. However, Wilson’s aggressive playing style once even led to his suspense, banning him for 20 games.

Thomas was selected by Washington Capitals in the first round of the 2012 NHL Draft. As of 2018, his salary was reported to be $1.1 million.

At long last, we have Miles William Wood in the first position in our list of Best Looking NHL Players. New Jersey Devils selected Woods 100th overall in the 2013 NHL Draft.

Miles ending up playing ice hockey was quite predictable as his father, Randy Wood, was a former NHL player who played for the teams like Dallas Stars, New York Islanders, Toronto Maple Leafs, and Buffalo Sabres.

He is regarded as a stunning hockey player due to his adorable personality and fine playing skill. Similarly, in 2016, his salary was $832,500.

Follow This Link to Read About The 20 Best-Looking NBA Players of all Time!

TTop List
Golf is considered one of the most deep-rooted and challenging games ever, the players are thrilled to get…
TTop List 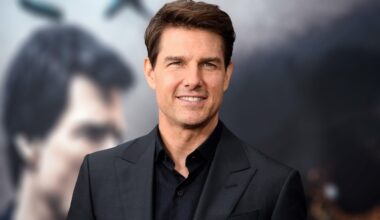 Read More
Who are the 25 richest Hollywood actors? Hollywood is home to some of the biggest entertainment industries and…