He plays as the small forward for the “Boston Celtics” of the National Basketball Association (NBA).

Since turning pro, he has proven himself as one of the league’s greatest young players.

Jayson was chosen to the NBA All-Rookie First Team in 2018 and became an NBA All-Star in 2020 after winning the NBA Skills Challenge.

Similarly, he won a gold medal as a United States Olympic squad member in Tokyo in 2020.

To understand more about Jayson Tatum, let’s look at his quick facts.

Jayson Tatum | Net Worth and Income

Multi-talented basketball player and athlete Jayson Tatum’s net worth is a whopping $25 million.

Tatum has amassed enormous wealth as a result of his spectacular basketball career.

The Boston Celtics selected Jayson third overall in the 2017 NBA Draft. He agreed to a four-year, $30 million rookie contract.

As his game improved over the period, so did his income.

Tatum and the Boston Celtics signed a freshman max contract deal for $163 million over five years on November 22, 2020.

The agreement also specified that if he reaches an All-NBA team the following season, his contract may be increased to $195 million.

On the season’s first night, Tatum had 30 points, seven rebounds, and a game-winning three-pointer in a 122–121 win over the Milwaukee Bucks.

Tatum was selected as an Eastern Conference backup for the 2021 NBA All-Star Game, and his contract money was extended as the deal.

Similarly, he must have made a good payout after securing a gold medal at the 2020 Olympic Games in Tokyo.

Medal winners are compensated differently in each country. Given the high cost of training, the US Olympic Committee pays $37,500 for a gold medal.

Although, financial support for competitors must come from other sources such as endorsement.

In fact, the celebrity athlete has amassed a sizable fortune through commercial and lucrative sponsorship deals.

Let’s look into Jayson Tatum’s net worth in different currencies, including the cryptocurrency Bitcoin.

In October 2019, Jayson spent $4 million on a luxurious suburban property in Newton, Massachusetts.

The two-story, 6,248-square-foot property near a wooded nature preserve is roughly 12 miles west of the Celtics’ home court.

His design-filled home is flourishing, with a custom-designed kitchen, the main suite with a fireplace, and an open floor plan.

Tatum could not focus on his game during the COVID-19 pandemic since he did not have a hoop, citing expense as a barrier.

Shortly after delivering an interview about how he went months without using a basketball, a hoop was installed.

Jayson owns a couple of luxurious automobiles in his garage.

He drives a classic black Ford Mustang. This vintage custom-built automobile is reportedly what the athlete received for his 23rd birthday in 2021.

He flaunted a white Rolls-Royce Wraith on Instagram in 2020.

Obviously, the Rolls-Royce Wraith is on the more expensive end of the market, with prices starting just under $330,000.

Multi-millionaire athlete Jayson Tatum lives a luxurious lifestyle with a net worth of $25 million.

Meanwhile, his mother has a law degree from Saint Louis University and is a practicing lawyer in the St. Louis area.

Jayson has a special bond with his mother. In fact, he attributes all of his success to her, as she gave birth to him at the age of 19.

He was selected Metro Catholic Conference Co-Player of the Year in 2013 after averaging 13.3 points and 6.4 rebounds per game as a rookie.

Tatum verbally committed to Duke University in North Carolina before his senior year.

In short, Jayson had a very successful and inspiring first season at Duke. Moreover, his freshman performance qualified him to enter the 2017 NBA Draft.

From 2014 to 2017, Tatum was in a committed relationship with his high school sweetheart Toriah Lachell. They split up in 2017.

However, they welcomed their child in December 2017 after ending their relationship.

Following that, he was in an open relationship with volleyball player Samantha Amos till 2018.

Samantha went to trash him on social media after their relationship ended, alleging he has many flaws and is easily replaceable.

Furthermore, Jayson has been dating English singer Ella Mai since 2019.

Tatum cherishes his time with his son and family. Jayson makes time, despite his hectic schedule to spend with them.

Hawaii is on his bucket list because he has never gone there.

The most surprising aspect of his journey is that he never packs underpants and always buys a fresh pair. It’s because he’s lazy and dislikes washing clothing.

Tatum is a generous person who enjoys assisting the poor and needy. Throughout his career, he has been involved in several non-profit activities.

He founded a charity organization called “The Jayson Tatum Foundation.”

Similarly, the charity annually recognizes agencies and programs in the greater St. Louis metropolitan region that require assistance and seeks donations with the support of partnered organizations.

His charity conducted the second consecutive golf tournament in 2022 to raise funds for the NGO. The competition was held at the Old Hickory Golf Club in Missouri.

A silent auction of autographed merch was part of the event.

As a prominent player, Jayson has been the heart of television for a few years.

Jayson has invested mainly in his health and the NBA contracts.

He regularly exercises and focuses on a healthy diet. To keep his system running, he consumes a lot of protein, carbohydrates, and fiber.

His go-to meal is usually chicken and turkey, which is an excellent source of natural energy.

Aside from that, the players consume tons of water to avoid dehydration and muscular cramping.

Tatum recently claimed that he does not waste any of his NBA earnings besides investing it entirely for the future.

He then utilizes his endorsement earnings to support himself and his charitable foundation.

Moreover, Jayson earns approximately one million dollars per year from his advertising and endorsement deals combined.

He has endorsement partnerships with Nike, Gatorade, Subway, and NBA 2K.

Furthermore, Jayson confessed in a podcast that he saves all of the money and spends his life solely on the money he receives from endorsement deals.

In his NBA debut, Tatum achieved a dual with fourteen points and ten rebounds as the team’s primary power forward in a 102–99 loss against the Cleveland Cavaliers.

The Celtics concluded the year with a 55–27 and entered the 2018 NBA playoffs as the Eastern Conference’s second seed.

Jayson scored a career-high 28 points in game 1 of the second-round series against the third-seeded Philadelphia 76ers in a 117–101 win.

After that, he became the first Celtics rookie to do so since Larry Bird in the 1980 NBA playoffs, also against the 76ers.

Tatum set a career-high with 39 points and 12 rebounds against the Charlotte Hornets on December 22, 2019.

Some Interesting Facts About Jayson Tatum

Tatum tested positive for COVID-19 on January 9, 2021, and missed many games.

Who are Jayson Tatum’s favorite artists?

His favorite artists are Drake, Lil Wayne, and Jay-Z.

Does Jayson Tatum have tattoos?

The NBA player is a tattoo enthusiast. Tatum has carved an image of his mother, birth date, son, and younger self on his torso. 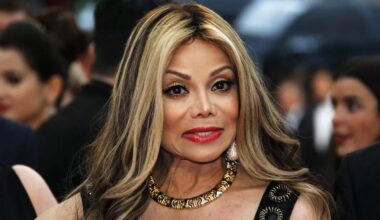 Read More
An American singer-songwriter, actress, media personality, and businesswoman La Toya Jackson’s worth is $1 million. The sister of…
NNet Worth 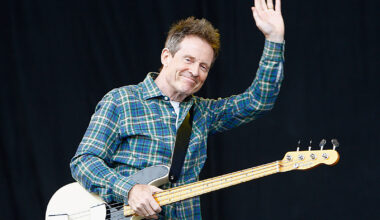