An American singer, songwriter, record producer, and convicted felon Robert Sylvester Kelly better known by his stage name R Kelly has a Net Worth of a negative $2 million.

Kelly is the most successful R&B male artist of the 90s has sold more than 75 million records worldwide.

His record sales easily make him one of the world’s best-selling music artists.

Similarly, with more than 32 million album sales in the United States alone, R Kelly was listed as the 55th best-selling music artist in America.

R Kelly is primarily known for his singing and songwriting, he has also produced, written, and remixed the song for other artists.

Undoubtedly, one of the most popular songs written by Kelly for another artist has to be ‘You Are Not Alone‘.

He wrote the song for the king of pop, Michael Jackson, for which he got nominated for the Grammy Award in 1996.

Here are some astonishing quick facts about R Kelly:

R Kelly Net Worth and Income

However, this was not the case always. R. Kelly, an American singer, has sold over 75 million records worldwide and 32 million albums in the United States alone, from which we can assume his income during his peak.

R Kelly’s net worth was once more than $150 million during his peak.

He won the $100,000 prize money as part of group MGM on the TV talent show Big Break in 1990, which became a breakthrough for the singer.

So he basically earned money in his singing days from record sales, live performances and tours, and brand endorsements.

Let’s check out his earnings over the years:

However, bad days hit him hard, and in April of 2020, he revealed to a judge that he owed roughly $1.9 million to the IRS.

Similarly, he was charged for being involved with an underage girl along with 22 other charges.

The hundreds of millions of dollars fortune that Kelly earned in his active days were all wasted to settle numerous lawsuits over the years.

Kelly lost a significant portion of his fortune after divorcing Andrea Lee, his wife from 1996-2009, the most profitable years of his career.

Moreover, Kelly owed over $5 million in unpaid taxes dating seven years which was revealed in 2012.

Similarly, he even lost several homes, and at times, he was even evicted from his homes after failing to pay the mortgage.

Let’s have a look into the Net Worth of R Kelly’s net worth in different currencies, including the cryptocurrency BitCoin.

During the absolute height of his career, R. Kelly owed numerous luxurious mansions across the United States.

Back in 1997, things were going really great for the singer and was earning tons of dollar bills to blow in mansions and other extravagant purchases.

During this time, he purchased a beautiful mansion in Olympia Fields, Chicago, for $3.5 million.

However, in 2011 it was reported that the singer had stopped making payment for his remaining $2.9 million mortgage of this six-bedroom, eight full and two half bathrooms mansion.

Ultimately Kelly lost the home to foreclosure. It was later sold for a mere $587,000 at auction.

Similarly, he also owned and rented a few other properties in Georgia. He rented a 9,000 square feet mansion in Atlanta for $10,000 a month.

Kelly now calls a Metropolitan Correctional Center in downtown Chicago home. For those who don’t know what that is, it’s a prison.

Kelly always had a thing for luxurious cars and used to own several of them.

Certainly, once one of the richest R&B singers in the world, who is currently doing his time, but during his active days, he did enjoy his fortune literally to the fullest.

He made some of the extravagant purchases, which drained his money, and to make the matter worse, his criminal charges emptied his bank account.

His financial troubles began in the late 90s. He was accused of several underage sexual abuse cases.

Over the years, he’s paid millions of dollars to settle the lawsuits made by the women who claimed they were abused.

He is currently facing 22 federal charges, because of which he’s been imprisoned since 2019 and probably will spend the rest of the days there.

Additionally, Kelly lost a significant chunk of his fortune for a divorce settlement with Andrea Lee. The couple was married for ten years and have three children together.

She later filed a lawsuit seeking $160,000 for unpaid child support.

Moreover, back in 1994, he married a 15 years old singer Aaliyah who had lied about her age in the marriage certificate. Kelly was 27 at the time. The marriage was annulled in 2015.

Furthermore, Tiffany Hawkins sued Kelly the following year. It turns out Tiffany, 15, and Kelly, 24, were in a relationship for three years.

Besides all his allegations, Kelly has done some good deeds.

Back in 1995, R. Kelly donated more than $27,000 to a charity in the United Kingdom, which was accepted by representative and former footballer Garth Crooks.

Similarly, he made a donation of $50,000 to the Texas Military Family Foundation after a fundraising performance in 2003.

Moreover, he also donated cases of water to the Flint Water Crisis in 2016.

Furthermore, Kelly wrote the song ‘Sign of a Victory‘ for the FIFA World Cup in 2010. The proceeds of the song went to African charities.

Though he is imprisoned due to numerous charges, no one can disagree that he had a successful career.

One of the primary sources of income for the singer in his days was his endorsement deals.

He had been inked with several brands to promote their products, including Alexanderwang, a fashion accessories brand, and Beats Studios, a line of headphones.

Moreover, with big names come big paychecks, and we are sure that Kelly bagged a pretty decent amount for these deals.

Out of several endeavors, R. Kelly had made most of his money from album and record sales.

He has collaborated with several top-notch performers over the years. Furthermore, he has sold what only a handful of artists in the industry have been able to sell.

Moreover, the album sold about eight million copies in the United States alone.

Similarly, his other most successful album is ‘12 Play‘, which was released in 1993. The album has sold 7.2 million copies worldwide and made over $8 million.

Read About Janet Jackson’s Net Worth, Marriage, Children’s, and Lifestyle

Kelly released his debut album in 1992 entitled ‘Born into the 90s‘. Following that, he released 12 Play which was certified 12 times platinum by RIAA thanks to the single ‘Bump n’ Grind’ that helped in album sales.

Along with his successful singing career, he also indulged in producing records for other artists. He produced and wrote the debut album of the teenage pop singer Aaliyah.

Moreover, Kelly released a self-titled album in 1995, which sold over 6.2 million copies worldwide.

Similarly, his single ‘I Believe I Can Fly‘ went on smashing the charts and peaked on the top. The hit single also garnered three Grammy Awards for Kelly.

What is R. Kelly’s biggest hit?

His famous records include I Believe I Can Fly, Step In The Name of Love and Bump N’ Grind.

What was Kelly’s last song?

He released his last son in 2018. It was a 19 minutes song, I Admit. In the song, Kelly addresses his allegations. 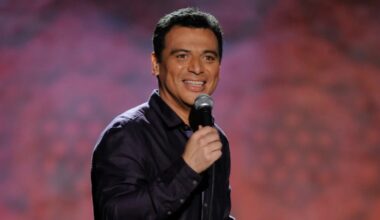 Read More
One of the most famous American comedians, Carlos Mencia’s net worth is an estimated $8 million. He is…
NNet Worth 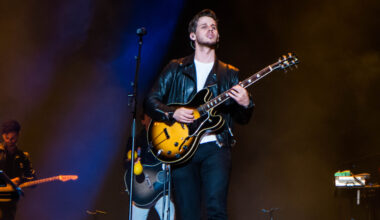