Luis Suarez is an Uruguayan National player who plays for Atletico Madrid in La Liga has a net worth of $70 million.

Suarez was born in Salto, Uruguay, on 24 January 1987. He is the son of Sandra Diaz and Rodolfo Suarez.

During childhood, his favorite player was Argentina’s No 9 Gabriel Batistuta.

He is undoubtedly one of the best strikers of this generation and has more than 500 goals for club and country.

Suarez began his professional career at Nacional in 2005. Currently, he is playing as a striker for Atletico Madrid.

Likewise, he made his senior international debut on 8 February 2007 against Colombia.

He can play in the center as a target man or secondary striker, score goals, and set up the goals for the team.

According to FIFA Profile, Luis Suarez has the great technical ability and can create a chance through powerful shooting.

Moreover, he has a great skill of nutmegging to the opponents and performing dummies.

Suarez is also known for his vision, work rate, quickness, and winning mentality. He is a natural striker and is a sweet timer of the ball.

Moreover, he can score goals through volley, heading, and acrobatics, making him a world-class striker.

Currently, Luis has a market price of €15 million. His highest market value was €90 million back in 2015.

He has achieved this net worth through contract, investment, and endorsements deals.

In 2018 Suarez was the 60th highest-paid athlete in the world with an earning of $23.6 million. Moreover, he earned $20.1 million through salary/winnings and $3.5 million through endorsement deals.

Currently, he is earning €6 million per year from his professional contract with Atletico Madrid.

Transfers and Earning from Professional Contract

Afterward, he signed a five-year contract with Ajax. Following that contract, Suarez would receive a weekly salary of $70,000.

Suarez played for Ajax till 2011 and moved to Liverpool for the transfer fee of $26.5 million.

He signed a five and a year half deal with Liverpool, earning a weekly salary of $232,000.

In Liverpool, his footballing growth started to increase exponentially, and Suarez turned into a lethal central forward.

Suarez signed a five-year contract with Barcelona. It would earn him a weekly salary of £405,000 per week.

He became a free agent after his contract with Barcelona finished in 2020.

Afterward, Suarez joined Atletico Madrid in a free transfer, where he is earning a yearly salary of €6 million.

Net Worth of Luis Suarez in Different Currencies

Let us see Luis Suarez’s net worth in different currencies, including BitCoin.

Luis has a house in Uruguay, Montevideo. He bought the property in 2014, and the value of the property is estimated to be around $3.2 million.

He also lived in a house at Liverpool when he used to play for Liverpool in the English Premier League.

Luis owns a mansion in Barcelona, which he purchased for €2.94 million.

Luis Suarez has a collection of luxurious cars. Some of the cars Suarez drives are Audi, BMW, Range Rover, Mercedes. In fact, he has a $4 Million Worth of Car collection.

He also possesses Caddilac Escalade available at the price of $76,195. Likewise, the car can move at a speed of 106 mph.

Suarez trains hard to improve his fitness, stamina, strength, and match sharpness as a professional footballer.

Similarly, on Tuesday and Friday, his training focuses on backs and biceps. His exercises include Lat PullDown, Fingertip Pull-Ups, Bicep Curls, Hammer Curls, and Tire Throws.

Likewise, he takes a rest on Sundays and spends his time with his family.

After the end of the football season, he goes on vacation to a different destination.

Recently, he went on Vacation to Ibiza with his former teammates Lionel Messi and Cesc Fabregas.

Suarez has donated over 1,000 Big Macs at the annual charity event held by McDonald’s in Uruguay.

He also played in a charity football match that took place in Anfield in 2015.

Suarez also provided Christmas baskets to the children at a hospital in Uruguay. Likewise, he also held a charity auction for PKU Research.

Luis Suarez has endorsement deals with Adidas, Puma and has appeared in many commercials.

He appeared in the advertisement for Beats alongside Thierry Henry and Neymar.

Likewise, he has also appeared in Garnier, Samsung, Pepsi, Cablevision, and Abitibi advertisements.

Luis Suarez started his professional career at Nacional in 2005. He played 27 games that season and scored 10 goals.

Afterward, he agreed on a move to Groningen and stayed there until 2007 before moving to Ajax.

Luis was named captain of Ajax before the 2009-2010 season. He was the highest goal scorer in Erdevise, with 35 goals in 33 matches and 49 goals across all competitions.

Suarez made 13 appearances scoring 7 goals for Ajax before joining Liverpool.

After moving to Liverpool from Ajax on 28 January 2011, he debuted against Stoke in Anfield.

Suarez made 13 appearances for Liverpool in his first season, scoring 9 goals and providing 9 assists.

You can read about former Liverpool defender Jamie Carragher

Moreover, he made a strong trio partnership with Messi and Neymar, and their trio was named MSN (Messi, Suarez, Neymar),

In that season, he made 43 appearances and finished the season with 25 goals and 20 assists.

He continued his excellent form in his next season, featuring in 51 games, scoring 37 goals, and providing 16 assists.

With 12 assists in the Laliga, he was the top assist provider for three consecutive seasons. Barcelona won La Liga and Copa Del Ray in the 2017-18 season.

Luis joined Atletico Madrid in 2020 after signing a two years contract. He played  38 times in 2020, scoring 22 goals and providing 3 assists.

Suarez played a crucial part in winning the Laliga title for Atletico Madrid.

To sum up, Suarez has made 686 appearances in his league, scoring 439 goals and providing 238 assists.

Suarez made his senior international debut on 8 February 2007 against Colombia. He has made a total of 123 appearances for Uruguay, scoring 64 goals.

Uruguay won Copa America in 2011, and he played a crucial role as he scored four goals and provided two assists during the competition.

In fact, for his excellent performance, he was named MVP Of The Tournament.

How many goals did Suarez score for Barcelona?

He has made 283 appearances for Barcelona, scoring 195 goals and providing 113 assists.

How much did Liverpool sell Suarez for?

Liverpool sold Suarez for a whooping €82.3 million (£64.98 million), making him one of the most expensive players in the world. 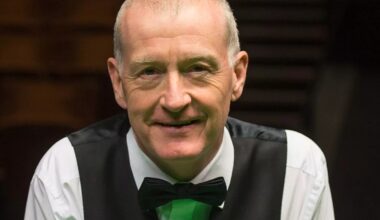 Read More
Legendary snooker player Steve Davis’s net worth is around $33.6 million. Steve Davis ruled the snooker game during…
NNet Worth
English Professional and Liverpool defender Jamie Carragher have a total net worth of $21 million. Jamie was born…