English YouTuber, rapper, social media influencer, and professional boxer KSI has an astounding net worth of $20 million as of February, 2023.

The Sunday Times has ranked the YouTuber in their list of top 100 UK influencers.

KSI registered his channel on YouTube in 2009 and started sharing videos of the FIFA video game series.

Eventually, he has diversified his content as his fan base grew to vlogs, comedy-style videos, and reaction videos.

If we take both of these YouTube accounts and combine them, he has an accumulated 34 million subscribers and over 8 billion views.

However, KSI is not the type of guy who is limited to just a single sector. He debuted his studio album Dissimulation, which debuted at number 2 on the UK Albums Chart in 2020.

He has worked with some A-lister artists such as Lil Wayne, Offset, Future, 21 Savage, and many more.

Similarly, KSI has achieved about 12 top 40 singles on the UK Singles Chart out of the seven ended up at top 10, and five of them ended up in the Top 5.

Likewise, KSI has appeared in several movies and documentary films.

Also, KSI has been involved in boxing too. In fact, he fought with fellow YouTuber Logan Paul and also on a professional bout.

Originally Olajide Olayinka Williams Olatunji, KSI was born on June the 19th, 1993, in Watford, Hertfordshire, London. His father, Jide is from Ibadan, Nigeria and his mother, Yinka, is from Islington, London.

He went to Berkhamsted School along with his future collaborator and member of the YouTube channel sideman.

KSI’s brother Deji is also a YouTuber. Tubular Labs ranked both the brothers in their list of UK Most Influential YouTube creators in 2015

However, KSI and Deji have been into a huge feud as Deji revealed KSI’s personal bank records in a YouTube video in November 2018.

KSI was not happy with the action and expressed disappointment towards his parents for allowing the publication of his financial records.

However, KSI concluded the feud between them in November 2019.

English YouTuber, rapper, professional boxer, and business personality KSI has an astounding net worth of $20 million.

He first launched his channel named JideJunior in 2008. Later he created another YouTube channel, “KSIOlajideBT,” in 2009. He thought the name was much longer and changed it to “KSI,” which is a bit more catchy.

On average, KSI earns about $15 million per year.

However, only about $3 million of that comes from his YouTube channel. He earns between $3 to $7 per thousand views.

If we take that into account, that makes about $158.55 thousand every month, which is about $2.38 million each year.

The rest of the $15 million earnings comes from his other endeavors, including businesses, advertising, and sponsorships.

Similarly, KSI has dipped its feet into the entertainment industry as well.

He started his rap career in 2015. KSI has over 11.5 million monthly listeners in Spotify, a music streaming platform.

And it’s safe to assume that he ears hefty sums from music streaming platforms such as Apple Music, Tidal, and Spotify itself.

Apart from that, KSI is also famous for his infamous boxing matches against other fellow YouTubers.

In August 2018, KSI fought against fellow YouTuber Logan Paul which earned him a handsome amount.

The match generated up to $11 million. However, that does not mean both the YouTubers bagged $5.5 million.

The match generated money from ticket sales, pay-per-view to stream live on YouTube at $10 a pop.

Apart from all those, KSI has also been involved in acting, which also earns him money.

Not to mention his sponsorships, brand endorsements, and business revenue, contributing to his net worth.

Net Worth of KSI in Different Currencies

Let’s have a look into KSI’s net worth in different currencies, as of February, 2023.

Reportedly, KSI has over ten properties all over England, worth more than $15 million.

KSI has put his hard-earned fortune to good use and bought a ginormous mansion in London in 2016.

The house was nicknamed Sideman House. KSI lived in this house till 2019 and shared it with his fellow sideman YouTube channel team members.

The mansion reportedly cost about $8.7 million as it boasts almost all of the luxurious amenities one could ask for.

The main house spans over 15,000 square feet of living space, which features a polished steel staircase, grand hallway with a custom-made walnut.

Similarly, a state-of-the-art gym, a home theater, a massive pool complex with a sauna, steam, and hot tub.

The gigantic Iron Gate opened up right in the sweeping driveway.

KSI did the tour of his apartment on his YouTube channel in 2014.

In the video, we can clearly see that this apartment was massive with a great view of London.

Similarly, it had a walk-in closet with an automatic lighting system.

Likewise, the master bedroom had an ensuite bathroom also with the best view of London.

Furthermore, this duplex apartment also possessed a beautiful glass staircase with lights in them.

The lower level of the penthouse featured 2-3 bedrooms and three bathrooms.

Similarly upper level featured a massive family room with a ton of lounging areas and a huge television.

The whole penthouse had a top-of-the-line sound system.

We are not actually sure whether he still owns the place.

Since KSI has properties all across England, he needs some sleek whip to travel from one to another.

KSI reportedly owns some of the best cars in the world.

Let’s get it done with.

The machine is capable of pumping its pistons to 177 miles an hour. KSI has even has a personalized nameplate on the car reading “KSIFLY.”

It comes equipped with 4.0-liter flax six engines which can pump 394 horsepower. However, it is a specification of top trim level.

Porsche makes two SUVs, and the Cayenne is top-of-the-line luxurious among them.

It comes with a 4.0-liter V8 engine which is capable of pumping 453 horsepower and 457-pound feet of torque.

That’s pretty fast despite its weight and the fact that it is a full-sized crossover SUV.

Let’s start with its price; Aventador is a flagship model from Lamborghini which costs over $379,000.

The Lambo was also featured in one of his songs.

This angry bull is capable of hitting the top speed of 218 miles per hour.

Given his massive net worth and annual income, KSI is living a lavish lifestyle.

He lives in an expensive and luxurious mansion and drives expensive exotic cars.

Now let’s check how the YouTuber stays in shape and what are his daily diet plans.

KSI’s diet plan is organized by his home chef, which consists of only healthy food as long as he is in the house and not traveling.

The whole diet is perfectly balanced with vegetables and fruits.

KSI’s breakfast usually includes waffles or whole-grain pancakes followed by a cup of coffee and juice.

For snacks, he does fruits and protein smoothies.

Similarly, for his lunch, he usually does salmon, chicken with veggies, and salad.

Likewise, KSI also drinks a lot to keep himself hydrated throughout the day.

KIS once posted in his story that his typical workout starts with 800 meters run.

However, he does not go for a run every day that is part of the weekly workout routine.

Since KSI has dipped his feet in the world of boxing, he needs to stay fit and stay in shape for his fights.

He also does a lot of Cardio which mostly involves long-term and short-term run several ties. He keeps on switching them to maintain his stamina.

Similarly, the cardio session also incorporates a minimum of 10-20 minutes of rope jump routine, which is really essential for boxing because it helps your foot move.

Similarly, he is also used to following a bodybuilding routine, but he focused more on another form of workout since he started boxing.

KSI has been involved in several charitable organizations and causes right from the beginning of his professional career.

He has already raised and donated more than half a million pounds.

Similarly, he participated in the Race against Slime event, raising money for SpecialEffect. It is a foundation for developing technology to aid people with physical disabilities in playing video games.

Likewise, KSI has been a part of various national television shows for charity, such as Comic Relief, Children in Need, Sport Relief, and Stand Up To Cancer.

Moreover, KSI was also part of a three football event hosted by Sidemen, which raised more than $550,000 for various charities.

The proceeds were donated to foundations such as Childline, Saint’s Foundation, and Charlton Athletic Community Trust.

Apart from that, KSI helped out a food bank to support The Independent’s Help the Hungry campaign on May 8, 2020.

Besides that, on 2 June 2020, KSI donated $10,000 to the Black Lives Matter Global Network Foundation and donated over $50,000 to various charitable organizations supporting black lives.

Similarly, KSI has donated to foundations such as Seaview Project in 2020 and prepared meals to support the Evening Standard‘s Food for London Now campaign on 18 December 2020.

KSI is really working to make a difference. These people are the reason people have faith in humanity.

KSI has made a few appearances in movies as well as television series and TV documentaries.

He has even produced some of the shows and worked on the soundtrack.

He is probably best known for his soundtrack for Baywatch. Similarly, he has appeared in 2016 Laid In America.

Likewise, KSI has worked on Sidemen, a television series, and 5 Aside miniseries.

KSI has invested his riches in some savvy business deals.

He owns his own line of clothing called King Apparel which is British wear.

Similarly, KSI’s leap in the world of boxing world has been a massive success so far.

He recently laid his hands on a boxing promotion company with some of the biggest partners in the industry.

The fact KSI is sorting out these promotional teams can simply mean that his next fight should be on the way soon.

Apart from that, KSI also revealed that he profited about $5 million from his cryptocurrency investment in 2021.

YouTuber, actor, and professional boxer KSI has also authored a book titled KSI: I Am A Bellend.

In his early days, he uploaded gaming-commentary videos of the FIFA video game series.

He dropped out of college to pursue a full-time YouTube career once he earned steady monthly income from the channel.

He explained asking his teacher whether or not he should drop out on an interview in 2014.

His teacher asked how much he was making, to which KSI answered about $2,000, which was way more than what his teacher was making.

Initially, his parents were not so sure and disapproved of his career selection, but they later became more supportive and appeared in some of his videos.

Are KSI and Deji friends?

Despite their beef about Deji revealing KSI’s bank account, they have reunited.

Does KSI have kids?

No, KSI does not have any kids that we know of.

How much does KSI earn per video?

KSI makes between $3-$7 per thousand video views, and it is tough to keep track of views on KSI’s YouTube channel. In short, KSI earns about $158.55 thousand per month from YouTube alone. 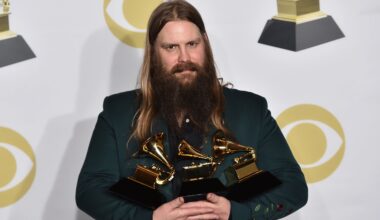 Read More
A well-known American singer-songwriter, guitarist, and record producer Chris Stapleton’s net worth is $12 million. He is most…
NNet Worth
An American actress, model, and philanthropist Jordana Brewster best known for her role as Mia Toretto in The…