An affluent Israeli-American media mogul, investor, and producer Haim Saban’s net worth is a whopping $3.4 billion as of October 2022.

Saban’s business and investment holdings are astonishingly broad, ranging from the financial to the entertainment industries.

He is also a well-known player in the TV industry thanks to his involvement in the well-liked western adaptations of Japanese shows like “VR Troopers” and “Power Rangers.”

Thanks to these series, he gave millennials and Generation Z a beautiful childhood experience.

Haim was honored with a star on the Hollywood Walk of Fame in 2017.

His transformation into one of the wealthiest individuals in the USA from a lowly bass player in a band who was struggling to meet his basic requirements is a truly amazing and inspiring story.

Please continue reading to learn how Haim Saban manages his finances. Haim’s life can undoubtedly provide us with a plethora of investment insights.

Haim Saban’s net worth as of October 2022 is a staggering $3.4 billion. Well, before diving deep into Haim’s financial life, let’s have a look at some of his personal facts.

As of October 2022, businessman, media personality, and producer Haim Saban’s net worth is an enormous $3.4 billion.

He spearheaded the sale of Fox Family Network to the Walt Disney Company in 2001. This sale became the largest cash transaction conducted by a single individual in Hollywood history.

His entertainment firm has a major share of profit from the X-Men and various other shows and products based on Marvel Comics characters.

In order to highlight how far each billionaire has gone to the top, Forbes added a self-made score to its ranking of the nation’s wealthiest people seven years ago.

The scale goes from 1 to 10, with 1-5 designating a person who inherited all or part of their wealth. Conversely, scores 6-10 are for people who made a fortune on their own.

Haim has a self-made score of 9, which indicates that all he has accomplished is as a result of his own struggles.

Saban currently runs the Saban Capital Group, which is estimated to be worth $2.9 billion.

The company raised $200 million by offering 20 million unit shares at $10 each when it went public.

He founded Saban Brands in 2010 to acquire and manage entertainment properties and consumer brands across media and consumer platforms worldwide.

However, in 2018, Hasbro paid more than $500 million for the majority of the brands, most of which went to Haim’s pocket.

Similarly, he founded Saban Real Estate in 2009 with the goal of acquiring and developing a “best-in-class” portfolio of commercial real estate.

It also capitalizes on opportunistic investments in a variety of geographies and real estate asset classes.

The company currently owns and operates a portfolio of properties totaling more than 10 million square feet across the United States.

The worldwide popularity of The Power Rangers later led to the creation of Fox Family Channel, a joint venture between Saban and News Corp, which was acquired by Walt Disney Co. for $5.3 billion in 2001.

Following a $43 million purchase in 2010, Saban Entertainment sold the Power Rangers brand once more to toy juggernaut Hasbro in a $522 million deal.

The Mighty Power Rangers is still one of the top-selling toy brands in the world.

After years of hardships and setbacks, Haim traveled to Paris and signed Noam Kaniel, a 9-year-old singer. As a result, he created an album that achieved platinum status.

This gave Saban the opportunity to launch a production firm and establish his own label, which eventually became one of the global leaders in the European Label Industry.

Haim made a good deal of money in the first eight years of running the label, selling over 18 million records worldwide.

Moreover, in 2019 it was announced that he had pledged $500 million to found Saban Music Group.

With a thriving streaming music economy in front of him, his decision to invest such a large sum of money in a music company makes perfect sense.

Net Worth of Haim Saban in Different Currencies

Haim Saban’s net worth as of October 2022 is an enormous $3.4 billion and here’s how it looks in other currencies:

With the success of Power Rangers, Haim purchased a four-acre plot of land in Beverly Park.

It is known as the Mediterranean complex. The main building and two smaller buildings make up the property. One is for visitors and entertainment, and the other is for his wife’s parents.

Cheryl Saban transformed the interior of this 23,000-square-foot French-style mansion with the help of an Architectural Design Studio.

The place was almost completely deserted before the Saban family moved and is now a sleek paradise.

Haim Saban, the billionaire, has a large collection of expensive vehicles in his garage.

Although he rarely drives one, he prefers comfortable models from companies such as Porsche and Volvo.

Saban also owns the yacht Eminence, which he purchased in 2019.

Similarly, he owns a Gulfstream G650ER private jet which is priced at $70 million on the market.

Haim Saban’s family moved from Egypt to Israel when he was 12 years old, and the five of them struggled to make ends meet while residing in a one-room apartment.

It was not a particularly reliable source of money for his father to sell pencils door to door.

Haim served for a short time in the Israeli military in his early 20s, which might be accredited to a disciplined lifestyle.

In terms of his marriage, Haim married Cheryl Lynn Flor, and the couple had two children.

Cheryl has always stated that even though Haim was a very busy man, he always made time for his family.

Before starting the Power Ranger series and becoming a billionaire, Haim had a sizable mortgage to settle, totaling about $60,000.

We can easily learn from his lifestyle and career progression that, no matter what obstacles life throws at us, if we have the drive, we can overcome them all and triumph.

Saban rose to fifth place among individual donors during the 2000 presidential election, with a total contribution of $1,250,500.

He has been described as a close friend, supporter, and adviser by Hillary Clinton.

In 2007, Saban and Steven Spielberg co-hosted a Hillary Clinton fundraiser at the home of News Corporation President Peter Chernin.

The Los Angeles Times reported that the fundraiser raised more than $850,000.

Saban, on the other hand, has donated to Republican Party members, including a contribution to George W. Bush’s 2004 re-election campaign 2003.

In the 2016 presidential election, Haim backed Hillary Clinton for President of the United States.

Saban’s eagerness for philanthropy and politics reflects both his diverse interests and his commitment to a strong relationship between the United States and Israel.

In 1999, Saban and his wife Cheryl established the Saban Family Foundation, which supports children’s health research and social welfare in Los Angeles, CA, and in Israel.

Saban, along with his wife, has donated $11 million to the Saban Free Clinic and $15 million to Soroka Medical Center in Israel.

Similarly, together the couple has donated nearly $47 million to Children’s Hospital Los Angeles.

The Saban family was named Philanthropists of the Year by The Hollywood Reporter in 2019.

While serving in the Israeli army, Haim Saban acquired a booking for a band. He did not, however, possess or possess the ability to play an instrument.

He immediately started his band because of this.

Haim wanted to be a bass player, but after some time, he went on to manage the band and even other bands eventually.

By the age of 24, Haim was organizing concerts and bringing well-known performers to Israel, including Ray Charles and José Feliciano.

After some years, he developed his own music label, which started to compose music for cartoons.

His label turned to making music for the animated series “Heathcliff” and “Inspector Gadget.”

In addition to acquiring recording, publishing, and management assets, SMG focuses on signing and bringing up and coming acts.

Saban has appointed Gustavo Lopez, a well-known music executive, and Latin music expert, as the CEO of SMG.

Early signings for SMG included Israeli duo Static and Ben El, as well as France-born Marie Monti, a singer/songwriter who performs in both English and Spanish.

With a bid of $13.7 billion, the group was successful in acquiring Univision. This equity was later sold in 2020 to ex-Viacom finance head Wade Davis.

Haim and his family moved to Israel when he was 12 years old.

He attended an agricultural school and served in the Israeli Defense Force. While in Israel, he established the country’s leading tour promotion company.

In 1975, he moved to France and founded an independent record label.

Haim Saban eventually relocated to Los Angeles in 1983, where he established a chain of recording studios. His venture quickly became the leading supplier of music for television.

Saban entered the television industry in 1988 when he founded Saban Entertainment.

He currently invests his time and efforts in real estate, entertainment, and music.

What was the name of the band Haim Saban?

The name of Haim Saban’s band was The Lions Of Judah.

How did Haim Saban get the idea of Power Rangers?

During a trip to Japan in the mid-1980, Haim stumbled across a child show on TV in his hotel room. That’s how he came up with the idea for the Power Rangers.

After receiving criticism for his pitching of the show, he finally got a meeting with Fox Kids Network in 1992. And the rest, as we know, is history.

What is the position of Haim in Saban Capital Group?

Haim serves as the chairman and CEO of the Saban Capital Group. 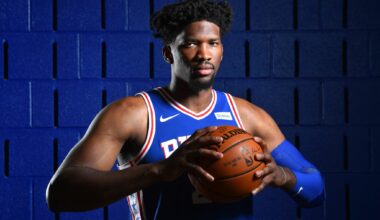 Read More
Cameroonian professional basketball player Joel Embiid, aka The Process, has a staggering net worth of $35 million.  He…
NNet Worth
A huge part of our mindset is influenced by what we listen to. In that regard, motivational speakers…