A Brazilian former soccer player who played as an attacking midfielder Ricardo Izecson dos Santos Leite, known professionally as Ricardo Kaká or just Kaká, has a net worth of $90 million.

Kaká is considered one of the best soccer players of his generation.

The legendary player has played for some of the well-known clubs and teams in the world, including AC Milan and Real Madrid.

Similarly, with an astounding success at the international level, Kaká is one of the eight players to have won the UEFA Champions League, FIFA World Cup, and the Ballon d’Or.

In 2009 he won the Golden Ball Award and also was a member of Brazil’s 2005 and 2009 FIFA Confederations Cup-winning team.

Here are some quick facts about one of the legendary players in soccer history, Kaká.

A Brazilian professional soccer player Kaká’s net worth as of June 2022 is an astonishing $90 million.

Kaká is considered one of the greatest players to ever walk on the face of this planet.

Similarly, he is also one of the highest-paid soccer stars worldwide.

Kaká has been able to bag tens of millions of dollars from his super successful professional soccer career, brand endorsements, sponsorships, and investments.

In a typical year, Kaká earns around $10 million despite the fact that he hung his boots nearly five years ago.

During his peak with the Italian club, AC Milan, Kaká earned a salary of $10 million.

Similarly, at the time, approximately $5 million came from endorsement deals with some of the elite brands.

Kaká had always fantasized about playing for a European club, and he quenched his thirst by signing with the European champions, Italian club AC Milan, in 2003 for a reported fee of €8.5 million or $9.11 million.

After gaining a few years of experience with a European club, Kaká was really kicking it in the field.

At the time, Ricardo was at the pinnacle of his career.

Consequently, several European clubs bid on the player, including Manchester City. According to BBC, City made a £100 million bid for Kaká in 2009.

Nonetheless, in 2009 Ricardo was transferred to the Spanish club Real Madrid from the Italian club AC Milan.

Reportedly the transfer was worth a staggering $85.1 million, making it one of the most expensive transfers at the time.

On 2 September 2013, AC Milan confirmed Kaká’s return to the club from Real Madrid on a free transfer.

Kaká signed a two-year contract with Milan with only performance-related incentives owed to Madrid.

Reportedly, in 2014 Kaká had entered into advanced discussions with Orlando City, which was set to enter Major League Soccer in 2015.

Up until Orlando entered the MLS, Ricardo was loaned to his first club Sao Paulo in Brazil.

In 2015 Kaká signed a contract with Orlando as their designated player.

The deal made Kaká the highest-paid player in MLS history, with an average annual salary of $6.6 million and $7.2 million per year guaranteed.

Net Worth of Kaká in Different Currencies

Let’s check out Kaká’s net worth in some of the major currencies around the world, including the crypto BitCoin.

Kaká purchased a beautiful $3.4 million mansion in the Isleworth neighborhood of Orlando, Florida.

Reportedly, his neighbors include sporting legends such as Grant Hill and Vice Carter.

Moreover, while his time with Real Madrid, he lived in La Finca, Spain. He reportedly purchased the mansion for €7.2 million.

He has a few cars in his collection that include both practical and sporty ones. It seems like Kaká has a thing for Audi automobiles.

In addition to Audi, he also owns a modest Hyundai Santa Fe worth around $35,000.

He is one of the greatest players in soccer history.

The two served as the best man at one another’s wedding.

He became the first sportsperson to accrue ten million followers on Twitter in April 2012.

Similarly, he is one of the most followed athletes on Facebook, with more than 40 million followers.

Kaká is an evangelical Christian. He was an active member of the São Paulo-based Rebirth in Christ Church.

He is so devout in his religion that his favorite music is the gospel, and his favorite book is, you guessed it, the Bible.

His sincerity and faith in Christianity do not end there. He once revealed that he wanted to become an evangelical pastor.

As for his marriage and relationships, Kaká married Caroline Celico, his childhood sweetheart, on 23rd December 2005.

They got married at São Paulo-based Rebirth in Christ Church.

Kaká himself dressed in a black suit while Caroline wore a stunning white wedding gown.

The wedding was attended by friends and family from both sides.

The couple had two children before splitting in 2015.

In mid-August of 2008, football star, Kaká was spotted in Portofino, enjoying a very relaxed and calm holiday session along with his gorgeous wife, Caroline.

Similarly, he has been spotted in several other parts of the world, including Miami, Turks and Caicos, and Cabo, Mexico.

Kaká has donated his time and energy to several charitable organizations and campaigns over the years.

He has been serving as an Ambassador Against Hunger for the UN’s World Food Programme since November 2004.

He also was the youngest athlete to be appointed on a particular project at the time.

Similarly, some other foundations he has supported include THORN, United Nations Development Programme, and Goal4Africa.

Likewise, as a devout Christian, he frequently donates to his Church Rebirth in Christ Church.

One of the greatest soccer players of all time, Kaká has graced the covers of numerous sports magazines.

Similarly, the guy has endorsed tons of brands and companies over the years.

The handsome hunk has endorsed brands such as Hyundai, Adidas, and WiseUp.

As mentioned before, Kaká made around $5 million per year from his endorsement deals alone.

Kaká has a modeling contract with Armani and features prominently in Adidas advertising.

As a matter of fact, in early 2007, Armani prevented Kaka from appearing in a photo alongside his AC Milan teammates that was published by Dolce & Gabanna.

Aside from that, Kaká’s name has been associated with Nike, PepsiCo, Sony, and EA Sports, among others.

Raised in an upper-middle-class family, Kaka was privileged enough to receive the resources he needed to excel in both athletics and academics.

Kaká’s family moved to São Paulo when he was seven years old.

He joined a local youth club named Alphaville, which qualified for the finals of a local tournament.

Lucky for him, he was discovered by the club São Paulo FC which offered him a place in the youth academy.

Why is Ricardo called Kaká?

It is because his brother Digão could not pronounce the name Ricardo as a kid and hence started calling him Caca, the name which stuck ever since.

Has Kaká won a World Cup?

Kaká was the part of Brazilian national team that won the World Cup in 2002.

In fact, some have cited Kaká as the fastest player with the ball ever. 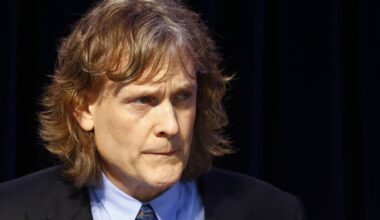 Read More
One of the biggest hereditary peer and media magnates, David Thomson’s net worth is $32 billion. He is…
NNet Worth
The American television and movie actress, model, and 90’s sex symbol, Bo Derek, enjoys a net worth of…