American professional basketball player, team member of the Los Angeles Lakers in NBA Lamar Odom has a total net worth of $30 million.

Lamar has spent the majority of his professional career in the LA Lakers of the National Basketball Association (NBA).

Moreover, In 2011 Lamar was named the NBA Sixth Man of the Year.

Lamar played basketball since high school and, in 1997, received national player of the year honors from the parade.

In the 1999 NBA draft, Lamar was selected by Los Angeles Clippers with the fourth overall pick in the first round.

Eventually, he was named to the NBA All-Rookie Team.

Lamar was suspended twice for violating the league’s anti-drug policy.

Furthermore, he signed and played the 2003-04 season for Miami Heat as a restricted free agent.

Later in his career, after being in the LA Lakers for seven seasons in 2011, he was traded to Dallas Mavericks.

However, his career started declining, and he was traded back to Clippers in 2012 and played in Spain in 2014.

Besides the NBA, Odom also played for the United States national team in the 2004 Olympics, winning a bronze medal.

Also, in 2010 as a part of the national team, he won a gold medal in the FIBA World Championship.

His father, Joe Odom, was a heroin and crack addict, and his mother, Cathy Mercer, died of colon cancer when he was just twelve years of age.

At the time of his mother’s death, she reportedly told him, “Be nice to everybody.”

After the death of his mother, Odom was raised by Mildred Mercer, his paternal grandmother.

He first joined Christ The King Regional High School in Middle Village, Queens but left at the start of his senior year because of poor grades.

He then transferred firstly to Christian Academy in Troy, New York, and then to St. Thomas Aquinas High School in Connecticut.

An American professional basketball player Lamar Odom has a net worth of $30 million as of 2022.

Lamar has amassed the net worth playing professional basketball for NBA as a forward for the LA Lakers.

Net worth today seems way low than what he earned in his career.

Reportedly, Lamar earned more than $115 million throughout his NB career.

Odom signed $33 million worth of contract with the Los Angeles Lakers.

In 2008-2009 he made the largest paycheck of his career earning $14 million in Los Angeles Lakers.

Despite earning hundreds of millions of dollars, he had some tax issues with IRS throughout his playing career.

However, IRS reacted against Lamar by ordering to pay $87,000 in back taxes.

Apart from that Lamar also earns from endorsements and his own line of clothing.

Net Worth of Lamar Odom in Different Currencies

Let’s take a look at Lamar Odom’s net worth in different currencies around the globe as of October, 2022.

Professional NBA player Lamar Odom has splashed some of his fortunes on some luxurious cars and real estate.

Just like every other NBA superstar Lamar has a sizable collection of automobiles.

Let’s check them out one by one.

The luxurious sedan is equipped with a 4.0-liter V8 engine that generates 453 brake horsepower and 487 pound-feet of torque.

Similarly, Odom has been spotted in his Mini Cooper S several times.

It comes with a 2.0-liter four-cylinder engine which pumps 176 brake horsepower. The car can reach the top speed of 142 miles an hour and can go from 0-60 miles an hour in 6.2 seconds.

This one is a more practical kind of vehicle Odom owns. This decent SUV has a 5.3-liter V8 engine that generates 420 brake horsepower.

These are not the fastest vehicles given their size and weight, but they still can juice up from 0-60 miles an hour in 7.6 seconds.

What good is a car collection if there is not at least one Mercedes-Benz?

Don’t be fooled by the luxury, though. It still has a 496 brake horsepower 4.0-liter V8 engine and is pretty fast.

The car comes with nine-speed automatic transmission and a 4matic all-wheel-drive system.

But this marvel of auto mechanics does not come cheap. The base-level S class comes with a price tag of $116,300.

However, this is not just one Mercedes-Benz on Lamar’s collection.

He also has a cool-looking G-wagon.

Lamar also has a Rolls Royce Drophead Coupe, which his ex-wife Khloe Kardashian gifted back in 2010.

The cars cost over little shy of half a million dollars.

Back in 2003, Lamar purchased an 8,557 square feet mansion in the suburb of Miami, Florida.

He paid just over $3 million for the mansion.

He rented the house for $20,000 a month when he was traded from Miami Heat.

Lamar attempted to sell the property for a couple of years, and in April 2017, he listed the house on the market for $5.2 million and later reduced it to $4.5 million.

Still, there was no sign of interested buyers. He again had to drop the price to $4.1 million.

He relisted the property a month later for $3.6 million.

Ultimately he sold the house for $2.6 million, which was half of its original listing price of $5.2 million.

But Miami mansion was not the place NBA forward owned.

He, along with his wife Khloe Kardashian, recently purchased a house in Mulholland Park neighborhood of Tarzana, California.

The house sat on ¾ of an acre.

The house featured a den, swimming pool with spa, an outdoor kitchen, a home theater, and interestingly an amusement park with waterfalls.

With multi-million dollars in his possession, Lamar does not shy to spend it on luxurious lifestyles and exotic vacations around the globe.

His wedding to Khloe was something to witness. More than 250 VIPs attended the event.

The guest list included the A-lister NBA stars such as Kobe Bryant as well as some other known celebrities such as Lara Spencer, Ryan Seacrest, and Kelly Osborne.

They also had a huge rehearsal dinner with some close relatives and friends, and of course, many of them were celebrities.

He is also a sneakerhead with his collection, including footwear from Nike.

Lamar has been to numerous exotic travel destinations for vacations, but most of them are not made public.

Read About J. Cole and his Lifestyle

Reportedly, he has been actively involved in more than four charitable foundations and supports seven causes.

In March 2004, Lamar launched Cathy’s Kids, and a non-profit organization focused on making a positive impact on the lives of underprivileged children.

Likewise, the organization also works on other projects, such as treating cancer, a disease that has played a significant role in his life.

Lamar Odom has made some screen appearances throughout his career.

He is best known for Van Wilder, Entourage, Khloe & Lamar, and Hood of Horror.

Apart from that, Lamar has appeared in Arliss, ESPN Outside The Lines Sunday, Fantasy Factory, Kobe Doin’ Work, and Keeping Up With The Kardashians.

Lamar once told in an interview that he wanted to invest in tech stocks such as Apple and Microsoft and also wanted to explore cryptocurrencies.

Very little has been known about the clothing line so far.

Reportedly, Odom endorsed Samsung back in his career.

Odom also endorsed Power Balance Bracelets. In fact, he was sued for the endorsement deal.

The complaint appealed that Odom was responsible for promoting the false products. Shaquille O’Neal was also entangled in the lawsuit as he was also the face of the product.

In the memoir, Lamar has written about the rise into the fame of a motherless and crack addict father’s child.

After his fantastic first season, he was named the 2000 NBA All-star Rookie First Team.

Similarly, Odom signed with Laboral Kutxa Baskonia of the Spanish League in February 2014.

Likewise, he played out the remainder of the 2013-14 season with the New York Knicks.

Lamar was in a relationship with Liza Morales.

They even had three children together. Sadly, the youngest of them died on June 29, 2006, from infant Death Syndrome.

In 2009 Lamar married reality television star Khloe Kardashian after a month of dating.

The wedding was featured on the show Keeping Up With The Kardashians.

Later in his career, Odom was found unconscious at a brothel in Las Vegas in 2015.

He had a kidney failure and also suffered from several heart attacks.

Khloe had submitted her petition in court but had to withdraw because of his condition.

After Odom made a full recovery, Khloe filed for a second divorce in December of 2016, and they were separated.

Who is Lamar Odom with now?

After a public divorce with Khloe Kardashian, Lamar was in a relationship with Sabrina Parr and got engaged in 2019 but later separated after a year.

Why did Khloe and Lamar break up?

Lamar was deep into substance abuse and later admitted to cheating on Khloe multiple times.

NNet Worth
An American actress and singer, Emma Roberts, has an incredible net worth of $25 million. Further, She is…
NNet Worth 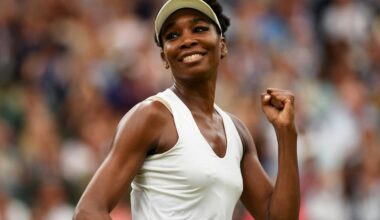 Read More
As of , American tennis player Venus Williams’s net worth is $95 million. She made her professional debut…