Co-founder and frontman of the heavy metal band Metallica James Hetfield’s net worth is $300 million.

James is best-Known for his complicated rhythm patterns and solos.

Metallica is one of the popular and successful metal bands of all time and has won nine Grammy Awards.

Metallica was founded in October of 1981 after James answered the advertisement in the Los Angeles newspaper The Recycler by drummer Lars Unrich.

James Hetfield was ranked at number 8 in Joel Mclver’s book The 100 Greatest Metal Guitarist in 2009.

Also, he was placed at number 24 by Hit Parade on their list of 1—Greatest Metal Vocalist of all time.

Likewise, Rolling Stones places Hetfield as the 87th greatest guitarist of all time.

His father, Virgil Lee Hetfield, was a truck driver and his mother, Cynthia Bassett, was a light opera singer.

Raised in a very strict Christian family, James is of English, Irish, Scottish and German descent.

He grew up with his two eldest brothers and one younger sister from his mother’s first marriage.

His parents separated when James was just 13 years of age in 1976.

Since his family was a very strict Christian scientist, they strongly disapproved of medical treatment even when Cynthia was dying from cancer.

His mother passed away of cancer in 1979 when James was 16 years of age.

James went to Downey High School for his first and sophomore years and later graduated from Brea Olinda High School in 1981.

James Hetfield, known as the frontman of the heavy metal band Metallica, has an astounding net worth of $300 million.

Music is the primary source of income to Hetfield. He has amassed quite a fortune in a Heavy Metal Band despite the mainstream music industry mostly occupied by pop culture.

Metallica has sold over 125 million albums as of now worldwide, with more than 65 million in the United States alone.

Their fifth studio album, released on August 12, 1991, named “The Black Album,” has sold over 30 million copies.

Even though record sales play an important part in the artist’s income but, Metallica as a band makes more money in live concerts.

Up until now, Metallica is one of the highest-earning bands around the globe. They are known to generate around $50-$100 million in revenue from tickets and merchandise sales from a tour.

Metallica has over 7 million per month listeners on Spotify, about 7.46 million subscribers on YouTube, and recently Metallica’s entire catalog started streaming in Tidal.

These are just the passive income for the band.

Net Worth of James Hetfield in Different Currencies

Let’s have a look into James Hetfield’s net worth in different currencies around the world as of February, 2023.

James, for most of his shows, wears Rolex Oyster Perpetua; Datejust II with custom engraving.

Even though the standard pricing starts at about $6,000, it goes way up to tens of thousands if you wish to customize as per your choice.

This is the former house of the Metallica frontman and guitarist James Hetfield.

This house has six bedrooms and six full and one-half bathrooms.

He also owned another house in LA, but it was sold in September 2021 for $4 million.

Not much information is available about the house, but James purchased this house in 2017 for $23 million.

James Hetfield is a car fanatic and had more than 10 custom-made cars until he donated them to Peterson Automotive Museum in Los Angeles.

He still owns a more practical pair of wheels, but that stuff is boring. Everybody in showbiz owns Range Rovers, Mercedes, Bentleys, and Rolls Royce.

But let’s take a look at this rather interesting car collection.

These classic cars were in his garage before he donated them to the museum.

He designs and works on them himself.

As far as his gear goes, James began with a comparatively inexpensive Gibson Flying V copy which he used on Metallica’s first album, “Kill ’em All,” but soon changed it with a couple of white 1984 Gibson Explorers that helped him well for another two albums.

Since the late 80s, he’s been almost entirely using ESP guitars, furnished with a pair of EMG 81/60 pickups – which sooner or later led to James’ own signature pickups dubbed the “Het” Set released in 2009.

His initial sound was a result of using a Mesa Boogie Mark IIC+ as preamp slaved into moded 100W Marshall JCM800 for the dirty tones while using a Roland JC120 for cleans.

One of his most used guitars in life is his 1996 Custom Ken Lawrence Explorer. He has been using the guitar from 1996 to the present.

Similarly, his other guitar is Ken Lawrence Custom Flying V. He has been using the guitar since 2010.

Likewise, he has been 1973 Gibson Les Paul Custom guitar most frequently since 2000.

These custom-made guitars can cost anywhere from $500 to $5,000, depending on the pickups and finish.

James Hetfield married Francesca Tomasi in August 1997. Together they have three children.

Life was not always easy for James. He struggled with alcohol in the past. He went to rehab to get sober for the first time in 2001.

His issues with alcohol have been detailed in the 2004 documentary Some Kind Of Monster.

Unfortunately, after 15-17 odd years of being sober, Hetfield again emerged in alcohol issues in 2019.

His band Metallica had to cancel their tour to Australia just so James could go to rehab.

James is a passionate fisher and hunter. He also customizes cars and motorcycles.

As for his dressing style, he always looks like what a rock star should look like. He loves Jeans, jackets, and leather boots mostly for his live performances.

He always puts a handkerchief on the back pocket of his jeans during live performances.

No concrete reason has been found about why he does that, but according to some, he does that because of his superstitious belief.

He yells to the bandana in case if he loses his voice.

Also, he likes to experiment with his looks. He changes his facial hairstyle frequently.

James hardly gets time to enjoy vacations with his family because of his band’s tours.

But when he goes out with his family, he tries to make the most of it.

Back in 2018, he was spotted in Mykonos, Greece, with his family on a yacht.

The family quite enjoyed the time together. They were seen enjoying Jet Skis and snapping photographs together.

A rather interesting fact about Metallica that everyone might not know is, the band has performed on all seven continents.

Yes, all seven continents, including Antarctica.

Back in 2013, Metallica played at Antarctic Base Carlini.

Similarly, back in 2009, the Hetfield’s were spotted in Uruguay for a family vacation.

Almost all of his charity works are carried out through the foundation established by the band Metallica called All Within My Hands.

It is a non-profit organization that works with Food Banks and scholar initiatives.

The foundation was established in 2007.

Similarly, James has donates his car collection to the museum in LA.

Likewise, in total, Metallica donated about $1.7 million across the band’s Worldwide European tour.

James Hetfield and his band Metallica have worked on the soundtrack for some movies, including Zombieland, X-men: Apocalypse, and Mission Impossible: II.

Metallica made a debut in the music scene in 1983.

The band’s most successful album is 1991 “Metallica,” also known as the black album. The album sold over 24 million copies worldwide, 16 million in the United States alone.

Metallica is by far the world’s single greatest metal band. It is also the biggest touring band with a career gross of over $1.4 billion since 1982.

Some of the best singles from the band include “One,” “Enter Sandman,” “Nothing Else Matters,” “ The Unforgiven,” “Turn The Page,” “I Disappear,” to name a few.

Throughout his career, James has been a major endorser of ESP Guitar since 1980.

James Hetfield is known for his real estate portfolio.

He has made some savvy real estate deals across the United States.

Hetfield has thousands of acres of open land in Marin County. Similarly, he also has invested in 1150 acres of property in Skywalker Ranch, which he bought in 1999.

He also owns a massive property in Maui, Hawaii, and Vail.

These are but just a few of the real estate owned by the rock star.

James has also written a couple of books in his career.

His book Reclaimed Rust: The Four-Wheeled Creations of James Hetfield was released on July 28, 2020. This book basically includes pictures of his customized cars which he restored.

Another book written by the rock star is The Art of James Hetfield, a music book that overviews the Hetfield technique.

James started playing guitar since the age of 14.

He was greatly influenced by the band Aerosmith and stated that they were why he wanted to play the guitar.

The trash pioneers went on to become one of the world’s most commercially successful heavy metal bands of all time.

With his robust control, commanding vocal style, signature rhythm guitar-playing, and creative song-writing, Hetfield has engraved a distinct place for himself and his band in the history of heavy metal music.

He has played a key part in taking the band from being an underground origins band to one of the greatest metal bands in music history.

Read About Arnel Pineda Net Worth

Is James the richest among his bandmates of Metallica?

Drummer Lars Ulrich is the richest member of the band with a net worth of $350 million as of February, 2023.

Is James Hetfield the richest Heavy metal vocalist in the world?

Is James Hetfield sober as of February, 2023?

After being sober for 15 years, James relapsed in 2019. The latest update on that is not yet available. 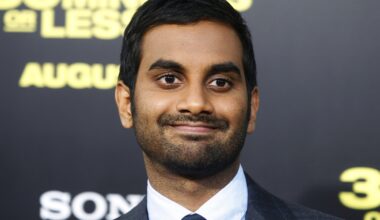 Read More
World-class comedian, writer, actor, producer, and director Aziz Ansari originally Aziz Ismail Ansari net worth is $20 million…
NNet Worth
The late American hip-hop RNB rapper was famous for his studio album “‘… And Then There Was X’,”…