An Academy-award-winning actor, producer, and director, best known for his multi-genre film and stage acting, Denzel Washington’s net worth is a staggering $280 million.

Denzel is one of the most bankable and decorated actors in the industry, whose films have grossed more than $4 billion in the global box office collection.

In addition to the regular acting awards such as Tony, and Golden Globes, Denzel is the recipient of the Presidential Medal of Freedom awarded by the President of the United States, Joe Biden, in 2022.

Having spent more than four decades of his career entertaining his admirers, Denzel is known for his frequent collaboration with directors Tony Scott and Spike Lee.

In addition, he is one of five actors in Hollywood to be nominated for Oscars in five different decades.

Denzel Washington’s net worth as of October 2022 is a whopping $280 million. Here are some quick facts on one of the most admired actors in the industry.

Hollywood’s one of the tremendous actors hailing from Mount Vernon, New York Denzel Washington’s net worth as of October 2022 is a whopping $280 million.

The man has more than 60 actors credit combining TV and films, according to IMDb, which justifies his astonishing net worth.

Besides acting, Denzel has tried his hands at directing and producing films and TV shows which has bagged him a remarkable amount of money.

Similarly, the veteran actor has landed on the list of highest earning celebrities several times over the past few decades.

Like most of the superstars in Hollywood, Washington started small and climbed the success ladder proving that if one has talent and diligence, color, background, ethnicity, and other hurdles won’t block ones way.

In addition to acting, Washington has a slew of endorsement deals and business pursuits contributing to his annual revenue.

In the year 1995, Denzel starred in the action/sci-fi film Virtuosity as Lieutenant Parker Barnes alongside Russell Crowe. The film was a modest hit grossing $37 million globally.

Denzel’s role in the film earned him a paycheck of $7.5 million.

Similarly, his role as Nat Serling in the 1996 war film Courage Under Fire earned him $10 million, as did the 1999 drama/sports film The Hurricane.

In 1998, Denzel starred in the thriller/crime film Fallen and action/thriller The Siege, both of which earned him a cool $12 million paycheck.

Likewise, 2001’s thriller film Training Day not just earned him a $12 million paycheck but also his second Academy Award but this time for Best Actor.

Up until this time, Mr. Washington had already proved his worth in the small as well as big screen and was bagging even bigger and better offers.

His portfolio now had two Academy Awards and the goodwill of one of the highest-paid actors in the world, which made him unstoppable.

For the 2003 thriller Out of Time and 2004 action flick Man on Fire both earned Denzel a staggering $20 million.

Still, his biggest payday was yet to come.

And this happened with the release of the 2007 crime-drama film American Gangster.

Washington earned a whopping $40 million for his role as Frank Lucas in the film, which grossed a whopping $266 million at the global box office.

Aside from these, the veteran actor is the lead and producer of the action film franchise The Equalizer.

The first installment of the film, released in 2014, pocketed him a cool $20 million.

And even though his salary from the later installment, i.e., 2/3, has not been revealed (3 has been announced), he may have earned the same amount, possibly more.

Net Worth of Denzel Washington in Different Currencies

Denzel Washington’s net worth as of October 2022 is $280 million. The following data shows how much it’s worth in other currencies, including the infamous crypto Bitcoin.

Actor and director Denzel Washington has invested heavily in real estate with his enormous fortune.

In the 1990s, Washington and his wife purchased an undeveloped lot in the exclusive gated community of Beverly Park, Beverly Hills, California.

The couple immediately began working on their love nest and eventually built a massive estate with a primary mansion featuring 30,000 square feet of living space and a guest house featuring 5,000 square feet.

The house is somewhat comparable to that of Mark Wahlberg’s, which is not far.

Mark put his mansion for sale for a staggering $87.5 million in April 2022, which means Denzel’s mansion is likely worth the same amount.

Before the mega-mansion, the star and his wife used to live in a four-bedroom home they purchased for $1 million in 1988.

Similarly, Denzel and his wife Pauletta splashed $11 million on an 8,000-square feet Century City, California condo in April of 2022.

Besides this, Washington also maintains a luxurious condo in New York which he purchased in 2006 for $13 million.

Denzel Washington’s net worth as of October 2022 is an enormous $280 million.

One of the most beloved actors in Hollywood, Denzel owns a fleet of luxurious cars that suits his personality.

Some of the most fantastic cars in his possession include Range Rover Vogue, Aston Martin DBS, Aston Martin Vanquish, and the 1997 Porsche 911 Turbo.

Similarly, he has also been spotted driving a black Mercedes Benz S Class on several occasions.

Read About Best Movie Soundtracks of All Time

Despite being one of the richest actors in the world, Denzel Washington is a humble individual.

He is not flashy with his wealth and tends to lead a modest lifestyle.

As a matter of fact, Denzel is a devout Christian and reads the bible every day.

He even considered being a preacher, but given his work, he remains busy most of the time and has not been able to think about it.

Moreover, Washington has been married to Pauletta Pearson since 1983. They first met on the set of the sports drama Wilma.

The veteran actor loves his work and does everything in his position to bring the character he plays to life.

While preparing for his role as Rubin “Hurricane,” Carter in the movie Hurricane Denzel trained with famous boxing coach Terry Claybon.

Similarly, for his role in the film The Equalizer, he worked out with Navy Seals.

Furthermore, in his free time, Denzel likes to listen to music and even shoot some hoops.

He is a huge Lakers fan, not as much as Jack Nicholson but still a fan.

He loves rap songs and has stated NAS, Eminem, and Jay-Z as his favorite rappers.

Denzel Washington’s net worth as of October 2022 is a whopping $280 million.

The modest Hollywood superstar Denzel Washington has supported numerous charitable organizations and campaigns over the years.

Let’s just say he has not kept his large pockets to himself.

Denzel has served as the official spokesperson for the Boys & Girls Club of America since 1993.

Besides that, he is also a board member of the nonprofit.

The actor donated $1 million to Wiley College and Nelson Mandela’s Children’s Fund in 1995.

Similarly, he contributed $2.5 million to help build the new West Angeles Church of God in Christ facility in LA in 1995.

He also donated $250,000 to establish a theater-specific scholarship at his alma mater Fordham and $2 million for an endowed chair of the theater department in 2011.

One of the most known American artists, Denzel Washington, was born in Mount Vernon, New York.

At age 14, Denzel’s mother, a single parent, sent him to Oakland Military Academy in New Windsor, New York, to educate and discipline him.

However, he never finished graduate school and returned to New York after a year to pursue acting professionally.

His first on-screen role came with the television movie Wilma in 1977.

Before this, he had some experience in stage shows.

With his appearance in Wilma, he received several smaller stage and screen roles.

He got his big break in 1982 with the medical drama St. Elsewhere.

Denzel remained with the show for the entire six-year run as Dr. Phillip Chandler.

After that, he appeared in a few films, including The Mighty Quinn and For Queen & Country, before scoring a real deal.

In 1989, Denzel booked a role of Private Trip in the war film Glory which earned him his first Oscars.

As of October 2022, Denzel Washington’s net worth is a staggering $280 million.

Which is Denzel’s upcoming film?

His most anticipated film, The Equalizer 3, is set to be released on September 1, 2023.

Was Denzel’s son drafted into NFL?

Yes, his eldest son John David was drafted by St. Louis Rams in the 2006 NFL Draft. However, he has since switched his career to acting, following in his father’s footsteps.

Denzel Washington is an exceptional actor and has delivered the most intriguing performances over the years.

Despite his background, he has been able to push himself and fulfill his dream of becoming one of the most admired superstars in the world.

As of October 2022, Denzel Washington’s net worth of $280 million is likely to grow in the future. 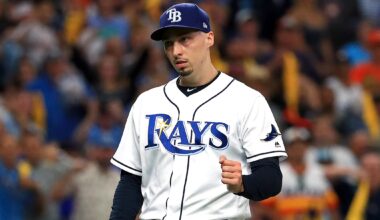 Read More
A well-known baseball player, Blake Snell’s net worth is $10 million. Snell is a pitcher with the Tampa…
NNet Worth
The American actress & model Margaret Qualley, best known for her role as Jill Garvey in the television…