He is a defensive end for the National Football League’s Minnesota Vikings. In the 2015 NFL Draft, Danielle was selected in the third round, 88th overall.

Hunter was a Louisiana State University football team member from 2012 to 2014.

Moreover, he was a two-year starter for the Tigers at the defensive end.

In three years, he appeared in 38 games, starting 23 of them, and starting 23 consecutive plays at defensive end.

Hunter was ranked as the No. 37 prospect in Texas by Rivals, who rated him as a four-star recruit.

Similarly, Scout ranked him as the 14th best defensive end, and ESPN ranked him the 34th.

To understand more about Danielle Hunter, let’s look at his quick facts.

Danielle Hunter | Net Worth and Income

Hunter has collected a huge sum of money through his active career in NFL.

Hunter and the Vikings agreed to a five-year, $72 million contract extension in 2018.

As per the contract, Danielle got a $15 million signing bonus and $40 million guaranteed.

The Vikings are expected to be $16 million over the salary cap in 2022.

For a guy who has appeared in just over a fifth of Minnesota’s games since 2020, his contract accounts for 12.5 percent of the Vikings’ cap spending in 2022.

It clearly shows the importance of Danielle for the team.

Hunter has recently made a swift recovery and returned to the field, where he fits best.

According to reports, Vikings is expected to keep Danielle in the team, and he is getting paid an $18 million roster bonus in 2022.

In addition, Danielle also gets endorsement and sponsorship deals, which has helped him bolster his wealth.

Furthermore, being a rising star of the NFL, Danielle Hunter’s net worth will surely rise in the future.

Let’s look into Danielle Hunter’s net worth in different currencies, including the cryptocurrency Bitcoin.

He maintains a private life with a bit of information leaked to the general public. As a result, we couldn’t dig out any information about his properties.

Nonetheless, Danielle has a house in Mendota Heights, Minnesota, USA.

Considering his wealth, Hunter may have few other properties to his name.

Hunter travels to a track two hours north of the Vikings’ team headquarters in Brainerd, Minnesota, on his Nissan GT-R Nismo, a vehicle that can cost upwards of $200,000.

He studied to become a great high-speed driver, skidding around corners as he deflects around tackles.

Danielle hasn’t revealed any of his other cars other than Nissan, but he must have a collection of expensive cars in his garage.

A rising NFL star, Danielle Hunter lives a comfortable life with a net worth of $3 million. Hunter grew up in Greater Portmore, Jamaica, before moving to Houston to be with his mother.

Danielle had never seen anyone who didn’t look like him before. He saw his first snow when visiting family in New York.

Even though he moved to America, Hunter still enjoys Jamaican culture, all about having fun and living in the moment.

After a coach witnessed him chasing down another youngster attempting to flee on roller skates, Danielle was recruited for youth football.

Despite playing defensive end for the very first time as a freshman, Danielle led his sports team to their first Class 5A State Playoff trip as a junior.

Hunter’s soft-spoken, restrained manner isn’t a mask for who he is. He speaks slowly and deliberately, and he doesn’t want to be stereotyped into a specific role.

He is not a nosy person and likes people who mind their business. Danielle’s casual nature is part of what makes him so mysterious.

Due to his reserved nature, Hunter hasn’t maintained any relationship publicly. He likes to keep his matter private.

Hunter maintains a sense of equilibrium outside of the game by pursuing various interests.

Motorsports, travel, using his drone to capture video of the places he goes, and editing the footage into a project are skills he learned from the internet, including YouTube.

Danielle likes to wear casual clothes with a traditional twist during a formal program when talking about his fashion and style.

Danielle Hunter loves traveling and taking a vacation. Danielle likes to spend quality time with his family and friends in his free time.

Hunter has traveled throughout the country and worldwide, from Iceland to South America and London.

Danielle traveled to Tokyo in 2019, which he described as “possibly his favorite place he’s ever been.”

He enjoyed the warm toilet seats and the fact that everything is so well arranged in the concrete jungle buzzing with millions of people.

Recently, Danielle was seen on an oversea trip, relaxing and getting recovered.

Danielle Hunter has been involved in charitable work. He has supported a few non-profit organizations in his career.

With the support of Scheels, Danielle surprised numerous students with a backpack full of school supplies to help them get ready for the new school year.

In 2018, he was nominated for the NFL Foundation’s Sportsmanship Award, which includes a $25,000 donation to a charity of the winner’s choice and a trophy.

Hunter donated his Madden check from the NFL Players Association to North Memorial Hospital in 2020 for Covid-19 initiatives.

Danielle Hunter, the Vikings’ standout defensive end, turned his pectoral muscle in 2021 and missed the rest of the season.

He suffered a torn pec muscle in Minnesota’s loss to Dallas.

Hunter fought back after missing the 2020 season due to a bulging disc in his neck and was playing at a high level when this happened.

It was also a significant setback for the Vikings, who lost one of their greatest players. Fortunately, Hunter has recovered from the injury and has resumed training in 2022.

Danielle feels terrific, and although the last three years have been difficult, he has remained upbeat.

Additionally, Hunter has encircled himself with people that are supportive of him. This season, he’s ready to go and has pledged to give it his all and return to the basics.

Danielle Hunter’s net worth as of October 2022 is a massive $3 million.

Hunter has invested in a few companies and brands that have increased his net worth.

Although, Danielle likes to maintain privacy in his businesses and investment.

Hunter’s most important investment is his health as an active NFL player. He spends every day training and maintaining his physique.

Talented athlete Danielle Hunter has endorsed a few products and brands to increase his net worth.

Similarly, he has an endorsement deal with a wireless network operator, Verizon.

Furthermore, Danielle has been a long supporter of Hyundai Motor Company.

Danielle Hunter joined the 2015 NFL Draft after his junior season.

Hunter ran the 40-yard sprint in 4.57 seconds at the 2015 NFL Combine, the fastest speed among the defensive lineman. On the 225-pound bench press, he accomplished 25 reps.

Danielle was the NFL’s youngest player as a rookie in 2015, yet he soon earned a rotating position on defense and came in second among all rookies and second on the club in sacks with 6.0.

Similarly, Hunter had 18.5 career sacks after two seasons with Minnesota, including four games where he had at least 1.5 sacks.

He had a good start to the 2018 season, recording at minimum one sack in each of the Vikings’ first seven games, including two sacks in Week 6 against the Arizona Cardinals.

Danielle is classified as a defensive end with excellent athletic promise and a terrific motor in his strength, burst, and potential.

Some Interesting Facts About Danielle Hunter

How fast is Danielle Hunter?

Danielle Hunter is extremely fast. In fact, Hunter ran the 40-yard sprint in 4.57 seconds at the 2015 NFL Combine, the fastest speed among the defensive lineman.

What number is Danielle Hunter?

Danielle Hunter plays from Minnesota Vikings with a jersey number 99.

No, Danielle Hunter is not injured right now. Hunter is fit and has returned to the field.

NNet Worth
Gina Rodriguez is an American actress with a net worth of $5 million. Her role as “Jane” in…
NNet Worth 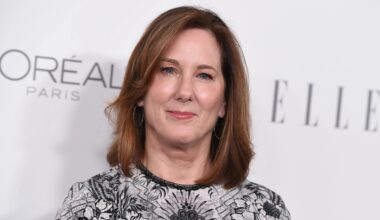 Read More
An American film and television producer Kathleen Kennedy’s net worth is a staggering $300 million. Her first movie…