The famous actor, producer, and director Aaron Paul was born on 27th august of 1979 in Emmett, Idaho.

In 1997, Paul graduated from Centennial High School in Boise, Idaho. After graduation, at the young age of 17, he drove to Los Angeles, California, with $6,000 of his savings to chase after his dream to be an actor.

In early 2000, Paul worked as a movie theatre usher at Universal Studios in Hollywood and eventually appeared briefly on a game show called”The Price Is Right.”

The American actor appeared in all five seasons of “Breaking Bad,” which aired from January 2008 to September 2013. The actor married Lauren Parsekian on May 26, 2013.

Likewise, the two first met in 2010 at the ‘Coachella Music Festival’ in California and got engaged on 1st January 2012 in Paris. The couple welcomed their beautiful daughter in February 2018.

Aaron Paul Net Worth and Income

After portraying Jesse Pinkman in the TV sensational series “Breaking Bad,” Paul was offered several TV series and movies for which he was paid a lot of money.

Before his acting career, Paul took part in a modeling competition and secure second place. Gradually, afterward, he became more and more renowned, which made him more wealthy.

Aaron Paul made his way into Hollywood through his recurring appearance in the American TV drama series “Big Love” from 2006 to 2011.

At the end of “Breaking Bad,” Paul made a total of $2.4 million. In addition to that, he also earned roughly $400,000 for several photoshoots and for appearing in talk shows.

Here is a list of movies and series and earnings made by Aaron Paul:

Additionally, he makes loads of cash by endorsing brands, photoshoots, and appearing on talk shows.

The famous Hollywood Actor Aaron Paul is bound to drive some expensive cars given his hefty $20 million net worth. Surprisingly, he has a special interest in old classics cars.

Toyota Tercel, which costs $4, 900 is also owned by the actor. He loves driving the car during weekends.

After marriage, Paul bought his wife a beautiful mansion including four bedrooms and three bathrooms for $1.4 million in LA. There is a giant plasma T.V., a warm couch, and a massive stone fireplace in the living room, where the couple loves to spend their evenings.

However, Paul currently lives in his Idaho house worth $2.2 million. His rustic-chic home is perfect for a family getaway.

Recently, Paul and his wife Lauren sold their 2,864-square-foot, Spanish-style home in Los Angeles for $2.198 million.

The ‘Breaking Bad’ actor has a fair share of watches. “El Camino,” a movie based on Breaking Bad, has premiered on Netflix and ring Sitges Film Festival 2019.

Aaron appeared wearing a steel and 18-carat white-gold Datejust 41 Rolex on his wrist worth $7250.

Aaron Paul is living a very luxurious life with his wife and daughter. Paul often seems to be wearing casual and comfy clothes like oversized and comfortable outfits.

Likewise, Aaron is someone who likes comfort over fashion trends. Although he looks dashing wearing those comfy clothes.

Aaron looked cool and stylish as he was seen walking the streets wearing a striped t-shirt and black denim, and a black zipper hoodie.

Similarly, he has a wide collection of branded clothes and shoes. Aaron is fond of shoes, and his favorite pair is Nike Air Jordan 1 “Not For Resale” sneakers.

Paul is a big music fan. He loves listening to music and podcasts on his $250 Megaboom Wireless Speaker and $400 Bose Noise Cancelling headphones while traveling.

In a show, Paul talked about his vacation with his wife in Africa, and he saw at the Kruger National Park after they landed in the middle of the park in a tiny plane.

In 2016, Aaron rented a Utah mansion through Airbnb to celebrate his brother’s exciting bachelor party.

Likewise, the luxurious getaway featured many amenities such as an in-ground pool, hot tub, fireplace, and pool table.

For Paul’s 40th birthday, he, his wife, and 28 other close friends spent ten nights in one of the lavish Ani Private Resort in the Dominican Republic; his wife organized the birthday surprise plan.

Accompanied by his wife Lauren Parsekian, Paul raised $1.8 million for the Kind Campaign; a non-profit anti-bullying organization co-founded by his wife.

Also, Aaron conducted a contest in which the winner was offered an opportunity to screen in Breaking Bad’s final episode.

Besides, Paul also supports campaigns such as LGBT, BLM movements, and Anti-Bullying, etc.

Ever since Paul’s acting career. He has played in numerous movies. Some of his notable films are: Whatever It Takes, Smashed, K-PAX, Bad Girls From Valley High, Perfect Opposites, National Lampoon’s Van Wilder, Wasted, El Camino, etc.

Aaron Paul is not only an actor, but he is also a Producer and Director. The American actor produced movies and shows such as Hellion, The Path, The Parts You Lose, etc.

But Paul does not publish a book; however, an audiobook narrated by him, namely “The Coldest Case,” is available on Audible.

As a child, Aaron began participating in church plays. He enrolled in his school’s theatre department during eighth grade and later decided to act his profession and move to LA, California.

Nonetheless, pursuing an acting career wasn’t easy, and he had to struggle for a decade. Later, he got into modeling and eventually started doing commercials as a starting point for his career.

His notable roles are in an episode of the television series Beverly Hills, 90210.  For the coming few years, Paul did minor roles in TV shows like ‘Melrose Place,’ ‘The X-Files,’ ‘Judging Amy,’ ‘CSI: Miami,’ and ‘Point Pleasant.’

Depicting Scott Quittman in the HBO drama series ‘Big Love’ aired from 2007 to 2011, he got renowned by many audiences. His role was recurring throughout the seasons.

Anyway, his absolute breakthrough was AMC hit series “Breaking Bad,” aired from 2008 to 2013, his character as “Jesse Pinkman” won the hearts of millions of viewers worldwide.

In 2019, Paul returned as Jesse Pinkman in the spin-off movie El Camino: A Breaking Bad. Not to mention, he was also a producer in the Netflix distributed film.

The movie made a gross box office collection of more than $40,000. Likewise, in the animated Netflix series Bojack Horseman, Paul voiced Todd Chavez and even served as an executive producer.

Yes, these two worked together for more than five years, leading them to be friends and good friends.

What does Aaron Paul’s wife do for a living?

Lauren Parsekian is an actor, director, and producer by profession.

Does Aaron Paul have a child?

NNet Worth
The Scottish entrepreneur, actor, philanthropist, and TV personality Duncan Bannatyne has a staggering net worth of 645 million…
NNet Worth 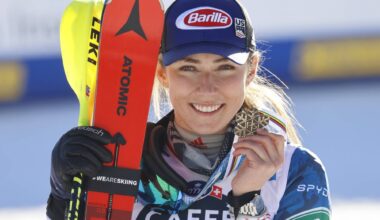 Read More
An American Olympic Gold Medalist, Mikaela Shiffrin’s net worth is a staggering $3 million as of . Mikaela…