One of the most famous faces in current pop culture, beautiful queen Nicki Minaj’s net worth is a whopping $100 million.

Nicki is a Trinidadian-born American singer, rapper, and songwriter known for her sharp lyricism and vigorous flow in her singing and rapping.

Queen Nicki is known for incorporating a multitude of genres, including hip hop, rap, and dance electronic, to create masterpieces.

Her successful single Super Bass peaked at number three on the Billboard Hot 100 chart, which was certified diamond by RIAA.

Similarly, the song also became the highest-charting solo song by a female rapper since 2002.

Nicki scored her first number-one single on the Hot 100 after featuring on the remix of Doja Cat’s “Say So” in 2020, marking the first partnership between two female rappers to top the chart.

She is one of the best-selling music artists of all time and yet does not have a single Grammy Award to her name but has been nominated ten times to date.

Do you know Nicki Minaj? Here are some quick facts that can help you get acquainted.

Rapper, model, actress, and R&B singer-songwriter Nicki Minaj’s net worth as of February 2023 is a staggering $100 million.

Queen Nicki has earned a massive fortune through her various pursuits, primarily music.

She is one of the best-selling music artists of all time, having sold upwards of 100 million records worldwide.

That’s easy $100 million from the record sales, even with a vague calculation.

Similarly, Queen Nicki has appeared on the Forbes list of highest-earning celebrity’s number of times over the years.

On average, she earns anywhere from $10 to $20 million per year, which upsurges in touring years.

Moreover, one of the greatest emcees in the current hip hop scene, Nicki, charges no less than $500,000 for a verse.

One of the most decorated emcees of the past decade, Nicki is unquestionably one of the greatest artists in the hip-hop industry.

Since her debut in 2010, her annual revenue has steadily climbed uphill, and so has her net worth.

With each year surpassing the previous year’s income, Nicki has earned hundreds of millions of dollars from her multifaceted profession.

According to the sources, she has to date, earned more than $166 million pretax.

The year 2013 was quite lucrative for Nicki as she bagged a whopping $29 million from various sources.

Forbes ranked her at number 10 that year with earnings from touring music sales but most notably her American Idol gig, which alone earned her $12 million.

Her income halved the following year, bagging just her $14 million.

However, in 2015 she again surpassed the $20 million mark with total earnings of $21 million.

Out of the total earnings that year, $2 million came from the single show which she performed at the corporate party of the Angolan telecom company, Unitel.

In 2014, Nicki headlined her third concert tour in support of her third studio album, The Pinkprint.

The tour grossed over $22 million at the box office from 38 total shows.

In addition to music sales and royalties, Nicki earns well from her brand endorsements and digital music streaming.

She is more than a pretty face and smart brains!

Nicki Minaj is one of the most-followed people on the social media platform Instagram with 193 million followers as of this writing.

Similarly, her YouTube channel has over 24.4 million subscribers with more than 9.2 billion views generating anywhere from $200k to $3.2 million in yearly revenue.

Moreover, Queen Nicki has over 37.9 million monthly listeners on Spotify with over 14 billion streams.

Even though her income from the platform is not known, we are pretty sure that it generates a decent revenue for the rapper.

Net Worth of Nicki Minaj in Different Currencies

As of February 2023, Nicki Minaj’s net worth is a staggering $100 million, and the following data shows how much it’s worth in other currencies, including Bitcoin.

The couple reportedly paid $35,000 per month to rent the place.

In 2017, after living in the mansion for only six months, Nicki’s home was broken into.

Law enforcement later revealed that the home was trashed, and suspects had flipped furniture and knocked over a ton of items all over the house.

Around $200,000 worth of items were stolen and destroyed.

Once her relationship with Meek came to an end, Nicki began dating her eventual husband, Kenny Petty.

In 2018, the couple moved into a $10 million, six bedrooms, eight bathrooms, 7,000 square feet mansion in the Flats area of Los Angeles.

As mentioned before, Nicki Minaj loves fancier things in life, and what’s fancier than the range of bright pink-colored hypercars parked in a multi-million dollar mansion.

All in all, her car collection is worth no less than $7 million, possibly even more.

Aside from her multi-million dollar automobile collection, she has a stylish air vessel.

Minaj owns a G5 private jet that cost her somewhere around $43 and $72 million.

Just like every other rap artist in the game, Nicki also has a flamboyant personality.

She is not afraid to show her riches.

She loves lavishing herself, her family, and friends with expensive gifts and holiday gateways.

In 2019, Nicki and her then-fiancé flashed their newly-acquired diamond rings, both made by New York based-jeweler Rafaello and Co.

Most women love to accessorize their outfits, but Nicki takes it to whole another level.

She spends $50,000 a month on accessorizing herself with Fendi, Versace, YSL, and Giuseppe shoes.

Also, she loves bags, and when she needs one, she goes straight to the Louis Vuitton store.

She is indeed living an American dream!

Moreover, magazines such as Allure, XXL, and Time have called Nicki a” fashion icon.” Similarly, Minaj has cited Gianni Versace, Christian Louboutin, and Alexander McQueen as his favorite designers.

Despite her badass and straightforward persona, Nicki has a soft spot in her heart for underprivileged and needy people.

Minaj contributed $15,000 to Food Bank For New York City in 2012 in the aftermath of Hurricane Sandy.

She also held a turkey drive at PS 45.

Nicki’s donations have crossed the national border on several occasions.

She donated $25,000 to the “St. Jude’s Home for Girls” school in 2020 after visiting the school in her home country in Trinidad.

In 2020, Nicki and 6ix9ine collaborated for a single Trollz, with a portion of the proceeds along with profits from all merch going to Black Lives Matter and Bail Project.

In 2012, Nicki, along with Ricky Martin, endorsed the Viva Glam campaign, which ultimately raised $270 million for the Mac AIDS Fund.

With a pretty face and busty figure, Nicki Minaj has been able to captivate millions of her fans worldwide which is why big brands hire her to promote their products.

She has endorsed and appeared in commercials and print ads for a number of products over the course of her career.

In November 2010, she collaborated with MAC Cosmetics for the lipstick “Pink 4 Friday”.

The company sold the products for four consecutive Fridays to support her album Pink Friday. It was her first collaboration.

In May 2012, she appeared in TV and internet commercials for Pepsi’s LiveForNow campaign. The campaign featured her single “Moment 4 Life”.

Moreover, Minaj was announced as the new face of Roberto Cavalli spring/summer in December 2014.

Nicki also starred in H&M’s holiday campaign in 2017. Aside from all these, Minaj has a successful line of fragrances called Pink Friday.

In 2007, she released her first mixtape titled Playtime Is Over.

Her debut studio album Pink Friday was released in 2010 under the Young Money Entertainment label.

She followed it up with a second album titled Pink Friday: Roman Reloaded in April of 2012.

The album was certified Platinum by RIAA.

Nicki set a record in 2017 for a number of songs on the Hot 100 for a female artist knocking Aretha Franklin’s record.

Who is more popular, Cardi B or Nicki?

Nicki has been around longer, which naturally explains her larger fan base than Cardi B.

Who is richer, Cardi B or Nicki Minaj?

Minaj is far richer than Cardi B. Nicki Minaj’s net worth is $100 million, while Cardi B’s is $40 million.

Nicki is a good friend of Taylor Swift, starting when Minaj performed on stage with Taylor at her Speak Now World Tour.

NNet Worth
Emma Stone’s net worth is $30 million. Emily Jean Stone, popularly known as Emma Stone, is an American…
NNet Worth 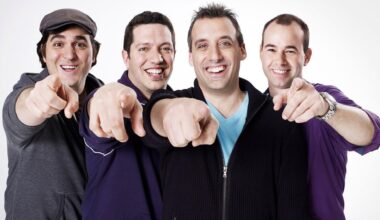 Read More
As of , the combined net worth of Impractical Jokers is $20 million, making them worth $5 million…