One of the prolific rappers in the industry who is also an actor, director, and songwriter, Ice Cube’s net worth is $160 million.

He is generally known as one of the innovators of gangsta rap.

Similarly, his dogmatic rap solo albums of 1990 Amerikkka’s Most Wanted and 1991 Death Certificate were critically and commercially successful.

Ice Cube was inducted into the Rock and Roll Hall of Fame as a member of N.W.A in 2016.

Cube gained recognition as a member of the hip-hop trio CIA and later the controversial rap group N.W.A in the late 1980s.

He was a lead rapper and wrote Eazy’s and Dre’s lyrics on Straight Outta Compton. It is said that the album shaped West Coast hip hop’s early identity and helped differentiate it from East Coast Rap.

The group N.W.A was also known for its violent, threatening, and abusive lyrics, which stimulated controversy. It was in late 1989 that Cube left N.W.A over financial disputes with Eazy-E and Jerry Heller.

After that, Cube teamed up with New York artists and pursued his solos career.

His father, Hosea Jackson, was a machinist and ECL groundskeeper, and his mother, Doris Benjamin, was a hospital clerk and custodian.

Ice Cube has an older brother, and they had a half-sister who was murdered when Cube was 12 years of age.

In ninth grade, he began creating raps at George Washington Preparatory High School in Los Angeles when a friend nicknamed “Kiddo” challenged him to do so in typewriting class. “Kiddo” lost.

After high school, Ice Cube left for Arizona to attend the Phoenix Institute of Technology in 1987.

He completed his diploma in architecture drafting in 1988 and returned to Los Angeles to rejoin NWA.

He was unsure about his career in hip hop, so he kept a career in architecture drafting as a backup plan.

Ice Cube Net Worth and Income

With a net worth of $160 million, Ice Cube stands as one of the richest rappers in the world. All thanks to his commercially successful albums, acting, and numerous lucrative endorsement deals.

His album Predator, released in 1992, went on to sell 193,000 copies in its first week. It was also Cube’s first US number-one debut on the Billboard 200 chart.

The album was certified double platinum by RIAA for sales of over two million copies.

Similarly, his other album Laugh Now, Cry Later, sold over 144,000 in the first week of its release.

If we take all the record sales into account in total, Ice Cube has sold over 40 million records worldwide.

He also makes a lot of money by writing songs for other musicians. He receives a significant amount of money in royalties each year.

Ice Cube has over 8.2 million monthly listeners on Spotify. In the same way, he also earns from different music streaming platforms, including Apple Music, YouTube, Tidal, and many more.

Besides his music career, the millionaire’s fortune is also supported by his movies. He’s acted, produced, and directed several films and made millions of dollars.

Ice Cube has written numerous storylines for movies, including Friday, which is an adult comedy that grossed over $28 million at the worldwide box office in 1995.

Apart from music and movies, Ice Cube also has his own clothing store named Solo By Cube.

Similarly, he is also e of the founders of Big3, which is a 3 0n 3 basketball league.

He has also made millions from his savvy endorsement deals with big companies like St. Ides Malt Liquor, Coors Light Beer, and his own brand Solo By Cube.

Net Worth of Ice Cube in Different Currencies

Let’s look into Ice Cube’s net worth in different currencies:

Ice Cube purchased this house along with his wife Kimberly Woodruff back in June 1996.

In 1997, the house was broken in by two gunmen who took away electronics gear and a van. Since that time, Cube likes to keep his house private, especially the interior.

Cube purchased this mansion for $2.3 million. These days the mansion is valued at more than $5 million. The house has a long and winding driveway.

The estate has a large main house and a detached guest house. The house spans over 7,880 square feet and has seven bedrooms bad seven bathrooms.

Ice Cube and his family spend most of their time in this particular home.

Ice Cube purchased this mega-mansion in 2016 from the action star Jean-Claude Van Damme.

Located in Marina Del Ray, the mansion was built in 2011 right on the bans of the Grand Canal.

Reportedly Ice Cube spent over $7.25 million for the mansion giving Van Damme a little profit considering he purchased the house for $6 million.

The three-story mansion spans over 7,574 square feet of living space with six beds and eleven baths.

A glass-enclosed stairwell and an elevator connect the three-story levels, and there are thirteen rooms in total.

Other features of the mansion include a full movie theater, a gym, and a concrete and glass wine cellar, and six fireplaces in total.

On top of that, there’s a swimming pool with Spectacular Ocean and city views right on the rooftop terrace.

This is an uber-luxurious car from a British auto manufacturer equipped with a 6.6 liters V12 engine that produces 563 brake horsepower.

The car can reach the top speed of 155 miles an hour.

He also has Bentley Flying Spur, which comes with 536 horses under the hood.

The SUV comes equipped with a 6.2-liter V8 engine which generates 420 brake horsepower and 460-pound feet of torque.

It is known best for its luxurious features and a classy exterior finish.

This is a mid-size luxury sedan that costs about $88,000. The car comes with 4.8-liter twin-turbo V8 engine that pumps 498 horsepower.

There are, but just a few cars rapper owns. He also has in his collection Corvette and 1964 Chevrolet Impala.

So how does the man with $160 million spends his time, and what is his daily routine? Let’s find out.

Ice Cube wakes up around 5:30 in the morning and hangouts with his family over a coffee.

As we can tell from his body structure that, he indeed has an intense workout regime.

His workout includes a lot of boxing, lifting weights, and intense running.

He really loves food cooked by his wife.

If his wife is not cooking, he goes for Chicken Chimichanga with parmesan cheese on top at El Cholo. Cube also loves hot sauce.

So that’s pretty much it. The man is always working either in his music or movies.

Contrasting to most celebs with such a large and well-regarded fame and fortune, Ice Cube refuses to rest on his successes.

Ice Cube has a high demand in the music as well as movie industry after all these years! Ice Cube has been a part of the music scene since 1984.

And the reward for the hustle is not so bad, standing at over $160 million.

As we can tell, Ice Cube is a family man and loves spending time with family. He has often been spotted with his family on vacations to Disney’s Hollywood Studio in Florida.

He is a huge NBA and LA Lakers fan and has been spotted numerous times in the game.

Cube is always working and hardly gets any time for vacation, but he makes the most of it when he does.

Although he doesn’t personally plan and go on vacations, she still manages to satisfy his desire to travel via traveling out of work with his family.

They’ve been spotted together at movie premieres several times.

Rapper turned movie star likes giving back to the community and has never forgotten where he came from.

Ice Cube has been involved in at least two charitable foundations and supports over four causes.

Cube donated $21,751 to Baltimore elementary school to fund a summer camp for boys in 1992.

Ice Cube, along with other celebrities such as Salma Hayek, and Jackie Chan, donated $100,000 to the charity organized by Chrysalis with Ratner organization which was considered the largest single donation Chrysalis ever received.

Similarly, he also made a contribution to Robert W. Coleman Elementary School for the summer camp program.

Furthermore, during the COVID pandemic, he came up with a “Check Yourself Before You Wreck Yourself” T-shirt. The proceeds from the T-shirt sales went straight to the under-funded hospitals and nurses in inner cities and rural areas.

Besides that, he also showed his contribution in fundraising in L.A. initiated by “Team Good Day Blimp,” The team raised $25,000.

Ice Cube has been in the movie scene for quite some time now.

According to IMDB, Cube has about 83 credits as an actor, 31 as a producer, 11 as a writer, and over 119 credits on the soundtrack.

He is best known for his roles in Friday, Boys n the Hood, Next Friday, and Ride Along.

However, the majority of the movies are comedies, with a few adult contents like the Friday franchise.

Ice Cube has invested a large chunk of its net worth in some savvy business ventures throughout the year.

Maybe the most successful and profitable business Cube has invested in his film production company, Cube Vision.

AID Partners will become a substantial shareholder and strategic advisor to the company and even will fund all the developing projects—quite a deal.

Cube also invested in the Big 3 Basketball league along with Jeff Kwatinetz in 2017.

Similarly, Cube has his own line of clothing named Solo By Cube.

Cube does not like to limit his skills and always indulges himself in some new projects.

Cube has been the face of numerous brands during the course of his career.

Over the years, Ice Cube’s name has been connected with numerous companies, the most noteworthy of which are St. Ides Malt Liquor and Coors Light Beer.

Cube became the face of the Coors Light Beer in 2011.

Similarly, Cube also launched his own clothing line, Solo By Cube, which represents urban culture with a distinctive twist.

Gangster rap legend wanted to combine his clothing line with the music and designed hoodies with built-in headphones. Quite innovative.

With all that said, Ice Cube is having a blast with his success and his loving family.

Cube and Kimberley Woodruff tied their knot on April 26th, 1992. The couple has four children together and lives in a multi-million dollars mansion.

After a dispute with former hip hop group NWA financially, he went on pursuing a solo career in 1990 and gained widespread recognition in no time.

He released back-to-back critically as well as commercially successful albums.

Cube has collaborated with some of the biggest names in the music industry.

He released his tenth solo album in 2018, named Everythangs Corrupt”.

He even stepped out of the hip-hop world for a while and worked with famous singers like David Bowie and Trent Reznor over some tracks.

Read About Andre 3000 Career and net worth

What is Ice Cube’s most famous song?

“It was a Good Day” and “No Vaseline” are the most famous songs by the rapper. 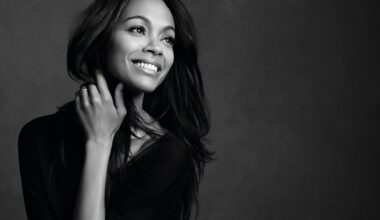 Read More
An American actress Zoë Saldana has a net worth of a staggering $35 million. Although she began her…
NNet Worth 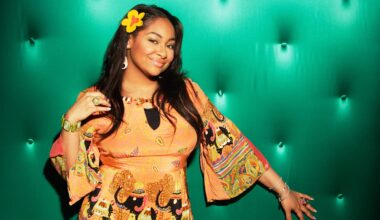 Read More
Raven-Symoné Christina Pearman-Maday, AKA Raven, has a massive net worth of $40 million as an actress, songwriter, and…