YouTube Celebrity Casey Neistat’s net worth is estimated to be $16 million.

He is an American YouTube celebrity, filmmaker, vlogger, and influencer.

Later in 2018, he founded 368, which is a creative space for creators to collaborate.

He was first introduced to videography and editing when he went to New York for a vacation. His elder brother there owned an iMac (1st generation) which could officially edit video. Neistat and his brother filmed Owen’s visit to the zoo and edited it.

In 2001, Neistat started making his first series of films with his brother. They worked with artist Tom Sachs to make series of films about the artist’s sculptures and installations.

Two years later, he gained his first international exposure with a three-minute film, “iPod’s Dirty Secret.” The film criticized Apple for not having a battery replacement for the iPod line.

A year later, Neistat and his brother produced a film series, “Science Experiments.” This series became immensely popular that it was featured in Creative time’s 59th Magazine.

Neistat started YouTube on February 17, 2010, when he uploaded a video about using the emergency brake on train cars in New York City.

Furthermore, in 2014, Neistat had been listed on New Media Rockstars Top 100 Channels. His channel ranked at number 82.

In addition, Neistat has also directed and starred in television commercials and worked for clients such as Samsung, Nike, Google, Finn Jewelry, J.Crew, and Mercedes-Benz.

Since his first YouTube video, Neistat has released more than 1000 films on his channel and has gained more than 12 million subscribers.

Let’s learn some facts about the multi-talented YouTube celebrity.

Casey Neistat: Net Worth and Income

The YouTube Celebrity Casey Neistat has a net worth of $16 million. His net worth comprises his career as a YouTube personality, director, producer, endorsement, and business owner.

Neistat’s daily revenue is expected to be around $2,480, resulting from his above 1 million daily views. This is roughly $75,000 monthly revenue as a YouTube personality.

His revenue also comprises the advertisement contracts with clients like Samsung, Nike, Google, and such.

Similarly, his investment in real estate is another factor for his Net Worth.

Have a look at another top-of-the-game filmmaker Brie Larson.

Like most celebrities with millions in their net worth, Neistat also spent his earnings on his house.

In 2019, Neistat purchased a luxurious house for $3.7 million in Venice, California. His house is spread in 3414 square feet that feature 4 beds and 3.5 baths.

The house was completed in 2015 by the architecture firm Electric Bowery. The house features a sleek kitchen with bar-styled seating and adjacent dining areas. It has a petite pool/spa surrounded by a wood deck and exotic hardwood floors throughout the house.

Below the rooms are the property’s most valuable feature: an alley-accessed three-car garage with additional off-street parking for two more vehicles.

People with millions of dollars net worth are sure to have some luxury cars, and Casey Neistat is no exception.

Neistat is a car fanatic as much as he is a tech savant.  His car collection seems to cross over half a million dollars.

Firstly, Neistat owns a Tesla Model X that is worth around $133,000. It is a 4 door electric vehicle that features a battery that produces power equivalent to 503 horsepower.

He is also seen driving around in a Mercedes SUV. The model and its specifications are yet to be publicized.

Despite the luxury and fun cars he owns, his favorite mode of transportation is his electric skateboard, known as Boosted Skateboard, which costs around $1500.

Casey Neistat is like a machine. He is a millionaire who hustles every single day.

As much as he loves the luxuries, Neistat loves getting out to the world by him even more. He has termed himself as someone who is never going to stop.

The man loves to work. He was born in a lower-middle-class family and has worked his way to where he is today.

This is the reason Neistat likes to keep a low profile. He is not a fan of wearing jewelry or spending his money on what he calls “Showing off.”

But, he has one place where he spends most of his money, and that is his technical equipment. Casey Neistat stays updated with the latest technologies.

Neistat has a strict routine that he follows every single day. He works out 2 times a day, wakes up super early, and always keeps a set of accomplishments every day.

However, he also had a bit off start with the police of the New York City Police Department on his criticism of ticketing cyclists for riding outside the marked bike lanes.

Except for that, Neistat doesn’t have any records nor gets involved in any activities.

Neistat is someone who makes videos for a living. These videos include travel videos as well.

This man is a person who loves to travel, and his work makes him able to do that.

Neistat publicizes every single travel journey made in the form of a vlog on his YouTube Channel.

From places to Dubai, Brazil, Parts of the US, Asia, etc. His travel log captures more than 100 flights per year.

In 2016, Neistat wanted to end the water crisis. He partnered with Charity: Water to provide clean drinking water to people in developing countries.

The goal of the program was to raise $1000-$5000 daily for 91 days. Neistat kicked off this charity but reported three times the expected goal.

Except for this, Neistat likes to keep his charity programs private.

Neistat made his TV appearance in 2004 through his first film series titled “Science Experiments.”

The work got featured in the Creative Times 59th Minute program, where one minute clip of Neistat’s film was shown every 59 minutes on the Panasonic Times Squares Astrovision.

In 2008, HBO purchased and an eight-episode television series named “The Neistat Brothers.” HBO premiered the series on June 4, 2010.

Neistat is a director, an actor, and also a scriptwriter. He has directed many movies and also has starred in some.

The first one is Daddy Longlegs by Josh Safdie, where Neistat starred as a cat burglar. The film premiered in 2009.

The next is Nerve by Henry Joost and Ariel Schulman, where Neistat starred as a player. The film premiered in 2016.

After that, Project Power also by Henry Joost and Ariel Schulman, where Neistat starred as the character “Moto.” The film was premiered in 2020 on the popular streaming platform “Netflix.”

Neistat has won numerous awards as a personality and a cinematographer.

Similarly, in 2016, he won the YouTuber of the Year Shortly Awards.

He won the “GQ Men of the Year” New Media Star Award in the same year.

Later on, in 2016, he won Streamy Awards under the category “Entertainer of the Year” and “Best First-Person Series.”

In 2017, he again won the Streamy Awards under the category “Cinematography.”

Neistat has been endorsed highly by tech companies such as Canon, Nikon, Nike, and others, stating him as “God of Vlogging.”

He reviews the product, which the companies, later on, use for their marketing.

In 2001, Neist and his elder brother worked with artist Tom Sachs making a series of films about the artists’ sculptures and installations.

The filmmaker got international exposure in 2003 for his film criticizing Apple for not having battery replacement for their iPod first generation. This exposure attracted national and international media as well as Apple’s company policy.

In 2004, Neistat and his brother’s film series called “Science Experiments” became so popular that it was featured in the Creative Times 59th Minute program. A one-minute clip of Neistat’s film was shown every 59 minutes on the Panasonic Times Squares Astrovision.

The series got praises from The Hollywood Reporter and The Washington Post.

This famous YouTube celebrity uploaded his first video on YouTube on February 17, 2010. The video was about using the emergency brake cord on train cars in the New York City Subway.

In 2011, Neistat uploaded a video where he criticized New York City Police Department for ticketing cyclists who rode outside the bike lane. The video titled “Bike Lanes” caught public attention.

In response to the video, New York Magazine even named Neistat a “Bike Vigilante.” The video made it to number 8 on the Top 10 Creative videos of 2011 by Times.

Furthermore, in 2014, Neistat got listed on New Media Rockstars Top 100 Channels. He ranked at number 82.

Neistat is known as the king of vlogs and his on-the-point edits. Most today know Neistat by his daily vlogs.

In fact, Neistat started to post daily vlogs on YouTube on March 26, 2015. The vlogs were a reflection of his daily journal.

Finally, on January 19, 2016, Neistat posted his 300th vlog, after which he stopped making vlogs to focus more on short movies.

Neistat had reached 4 million subscribers by August 2016, and in September 2016, he was awarded GQ’s “New Media Star” Man of the Year award.

By 2021, Neistat’s channel has received over 12 million subscribers.

In addition to Neistat’s career in YouTube and Films, he also directs television commercials for clients such as Samsung, Nike, Google, J.Crew, Finn Jewelry, and Mercedes Benz.

His video “Make It Count,” written for Nike as a movie about what it means to “#makeitcount,” went viral with over one and a half million views within the first three days of upload. As of October, 2022 the video has over 31 million views.

In addition, the video gained comments such as “The Best Branding Story Ever” by Mashable’s Zoe Fox and “Going Rogue” by CNNGo, Fast Company, and Conde Nast Traveler.

Beme is a video-sharing app designed by Matt Hackett and Casey Neistat. It is a platform for 4 seconds of non-edited video where subscribers cannot review but react to the uploads in contrast to the highly edited videos on social media platforms.

The New York Times explained Beme’s user experience as “the platform for viewers to experience what the user is experiencing.”

368 is a creative space for creators to collaborate.

What is Casey Neistat’s “Golden Rule” for creators?

Individuals who works in a creative field has to make sure that the work benefits both the brand and the person.

In the world of vlogging, Casey Neistat mostly uses locked shots, which most people following the same field don’t.

Casey Neistat got married on December 29, 2013, to Candice Pool. They got married at a Jewish wedding in Cape Town, South Africa.

NNet Worth
One of the richest singers in the world, Justin Timberlake’s net worth is $250 million.  The American singer…
NNet Worth 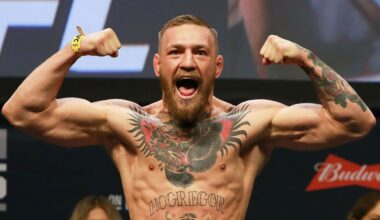 Read More
An Irish athlete and arguably the most famous mixed martial artist in the world, “The Notorious” Conor McGregor’s…